Weapons that Kill the Future

The War, as we know it, has ended more than 40 years ago, but to the people of Quang Tri, Vietnam, it still much remains a part of their lives. They do not know what the War was fighting for nor do they understand why they have to bear the sufferings "“ they are the neglected victims of the War.

During the Vietnam War, the Central parts of the country, especially in the region of Quang Tri, were heavily targeted for defoliant spraying. Defoliants are often safe kept in drums with orange lines marked around them, hence are also called as Agent Orange. Its main component, Dioxin, builds up inside one's body and is passed onto to the next generations, and eventually leads to physical deformation. At present, the official number of defoliant victims stand at 900,000 in the Quang Tri Region alone, representing 0.68% of its population. From December 1st to 13th of 2012, with the support from the Quang Tri Region's VAVA (Vietnam Union of Friendship Organization), I visited and interviewed families in the region who to this very day suffer from the horror of the War. 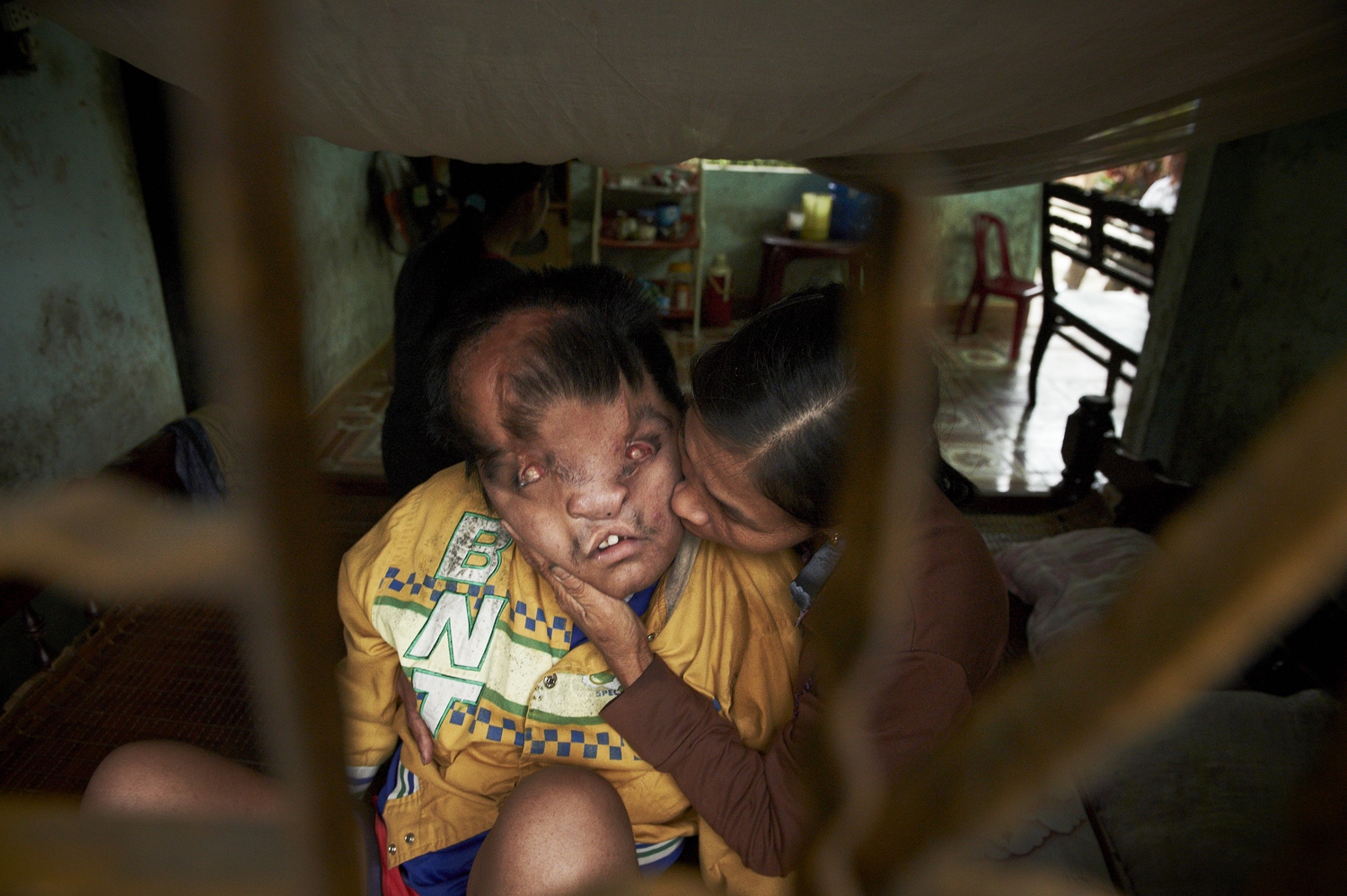 Son of a War veteran, Doduc Duyen (Born in 1997) has eyes that cannot see, ears that cannot hear, and a body he cannot control. He was born with a faceâ€sized tumor on his head and had it surgically removed when he was 18 months old with the financial aid of the Taiwanese NGO. The tumor is growing back again, but this time is accompanied with severe paralysis and epilepsy symptoms. His only hope in life is his motherâ€™s unconditional motherly love. The War brought destruction on generations after generations for mankind. The motherâ€™s love for her child is the only defense for this mother and son. (Dec. 8, 2012) 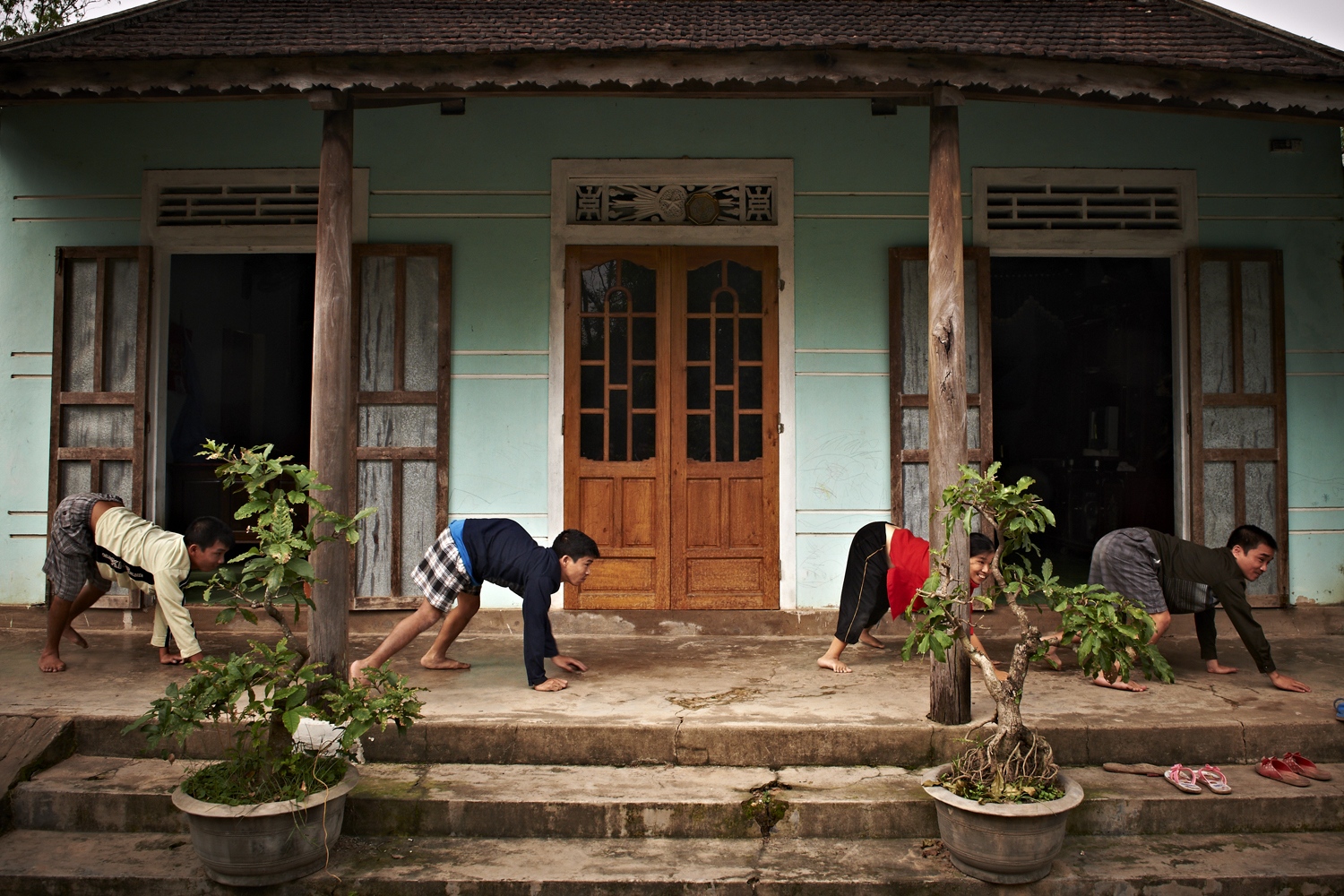 Throughout the interview, the mother sat on the side, quietly weeping for the unbearable guilt she had, for giving birth and bringing them to life. (Dec. 8, 2012) 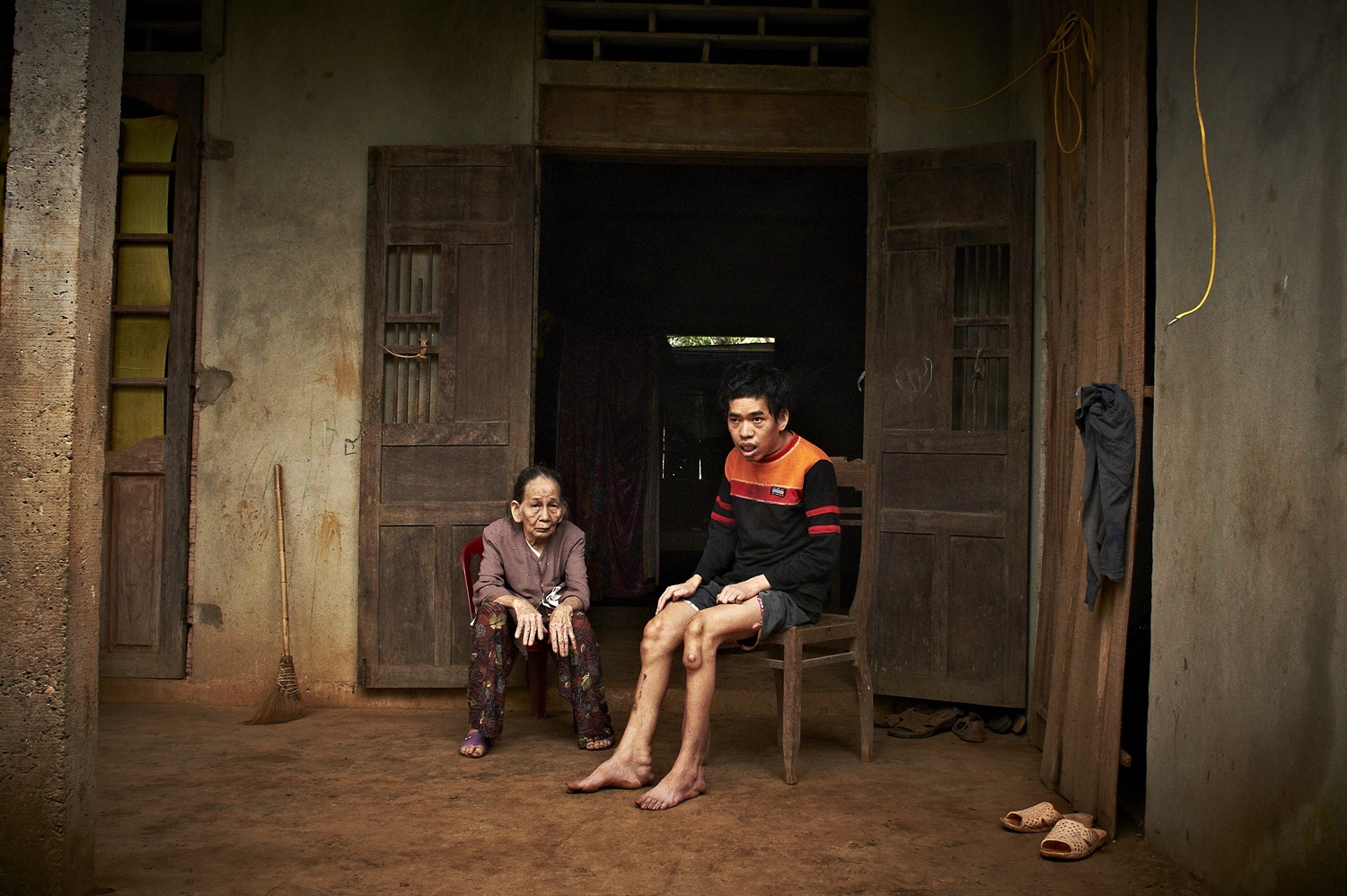 Deaf and mentally challenged, Hoang Van Trung (Male, born in 1978), lost his father to Agent Orange, a civilian who was directly hit by the chemicals during the War. Hoang Van Trung is suffering from severe skin cancer on his lower part of body and is unable to walk. The only person he can depend on is his frail and old grandmother. (Dec. 8, 2012) 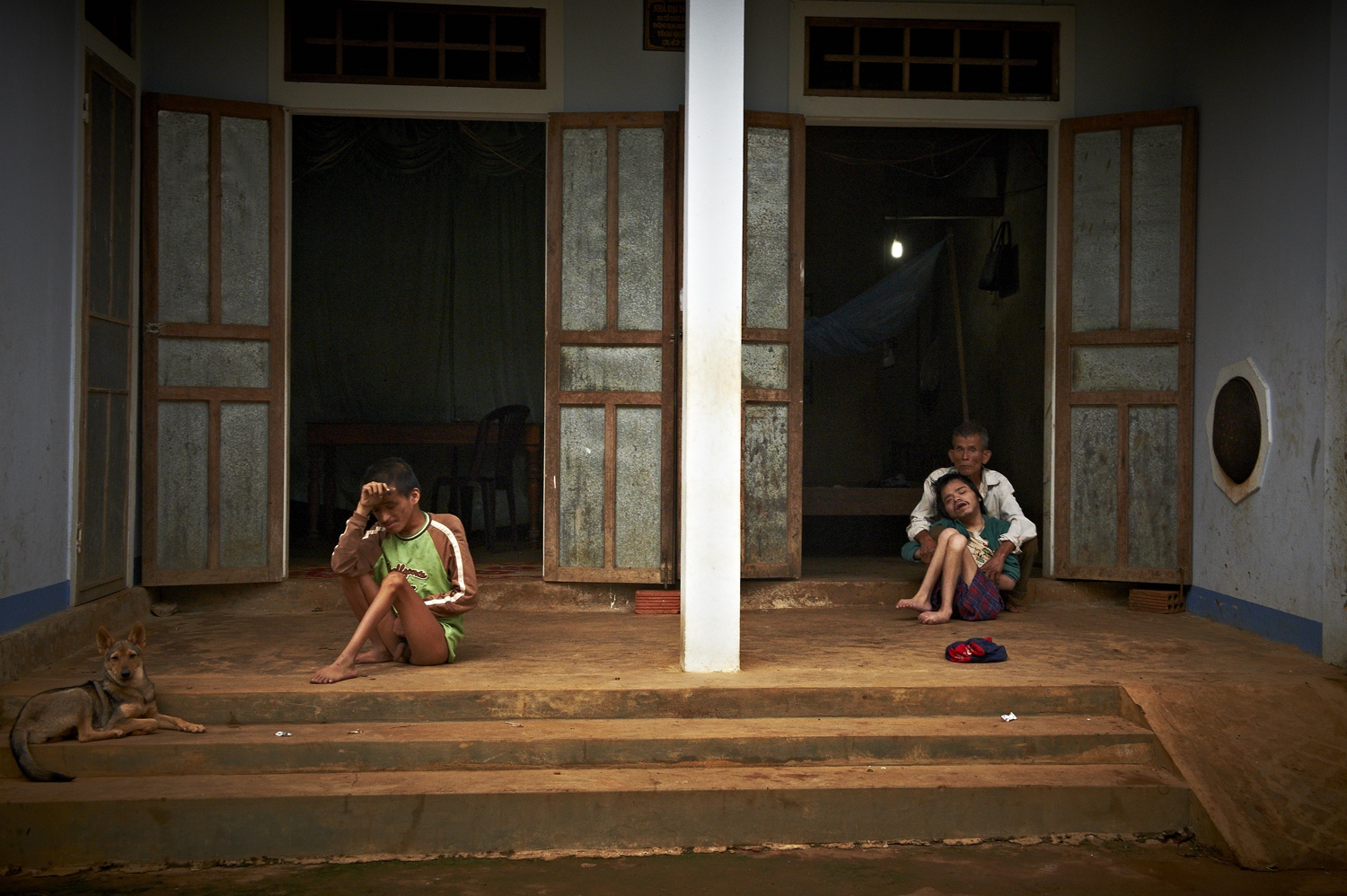 The father, Nguyen Van Loc (Born in 1944), was a Vietnam War and has been hit directly by the Agent Orange several times. He has four sons, of whom only the first born is healthy. His third and fourth sons Nguyen Van Truong (Male, born in 1981), Nguyen Van Lanh (Male, born in 1988), suffer from cerebral palsy and full paralysis, respectively. The second son died at the age of four. On my visit, I noticed that in their household the dog seemed to be the only living creature with any sign of life. (Dec. 8, 2012) 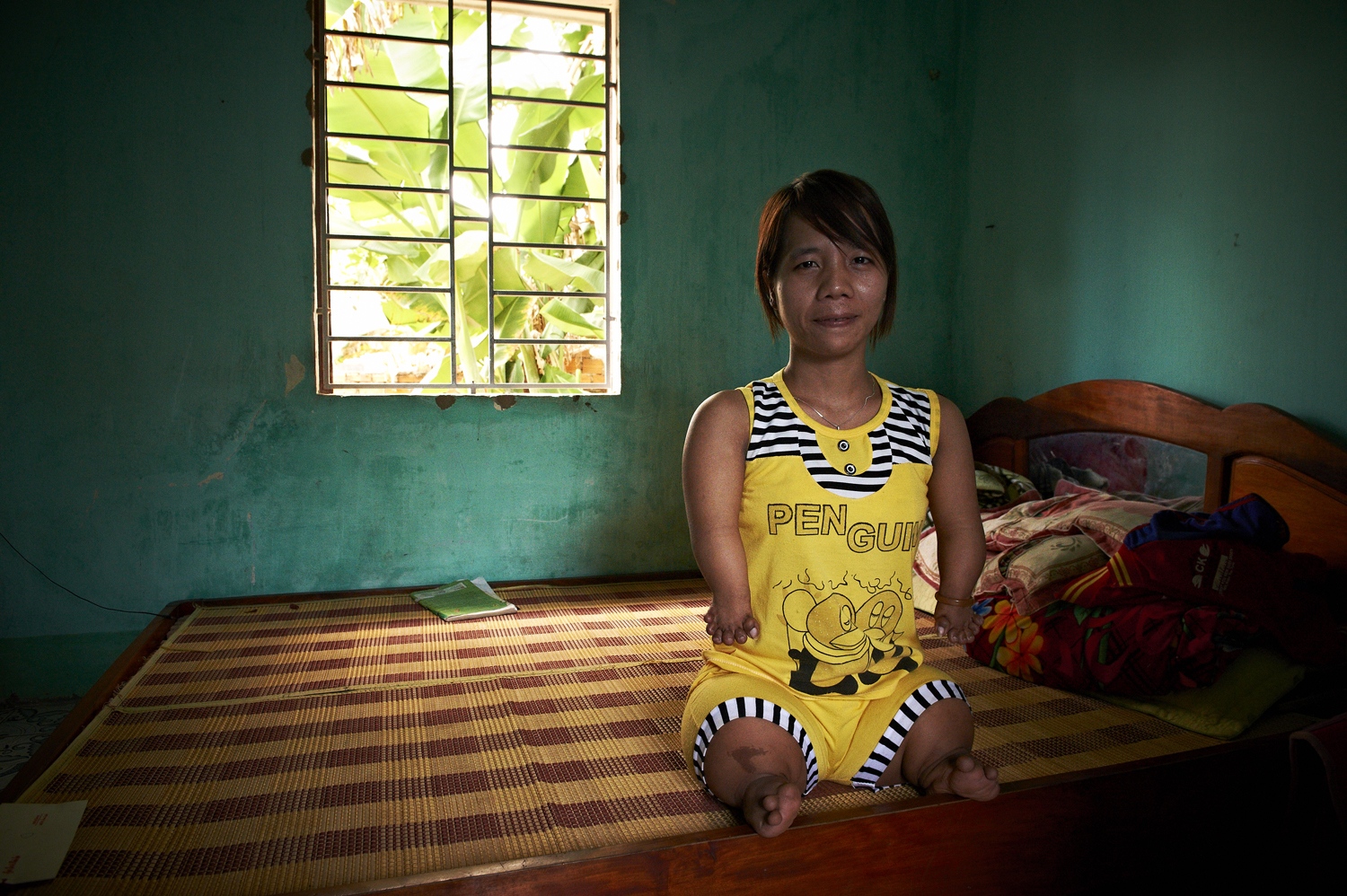 Le Thi Hoa (Female, born in 1985), was born with six fingers that were bunched up like grapes. She looks very different from most other midgets, with her body frame much resembling a torso sculpture that moves. Her older sister suffers from similar symptoms and together, with much difficulty, manage to live by running a small corner store. Their father fought in the War from 1963 to 1972, and during that period was exposed to the Agent Orange, countless times. (Dec. 8, 2012) 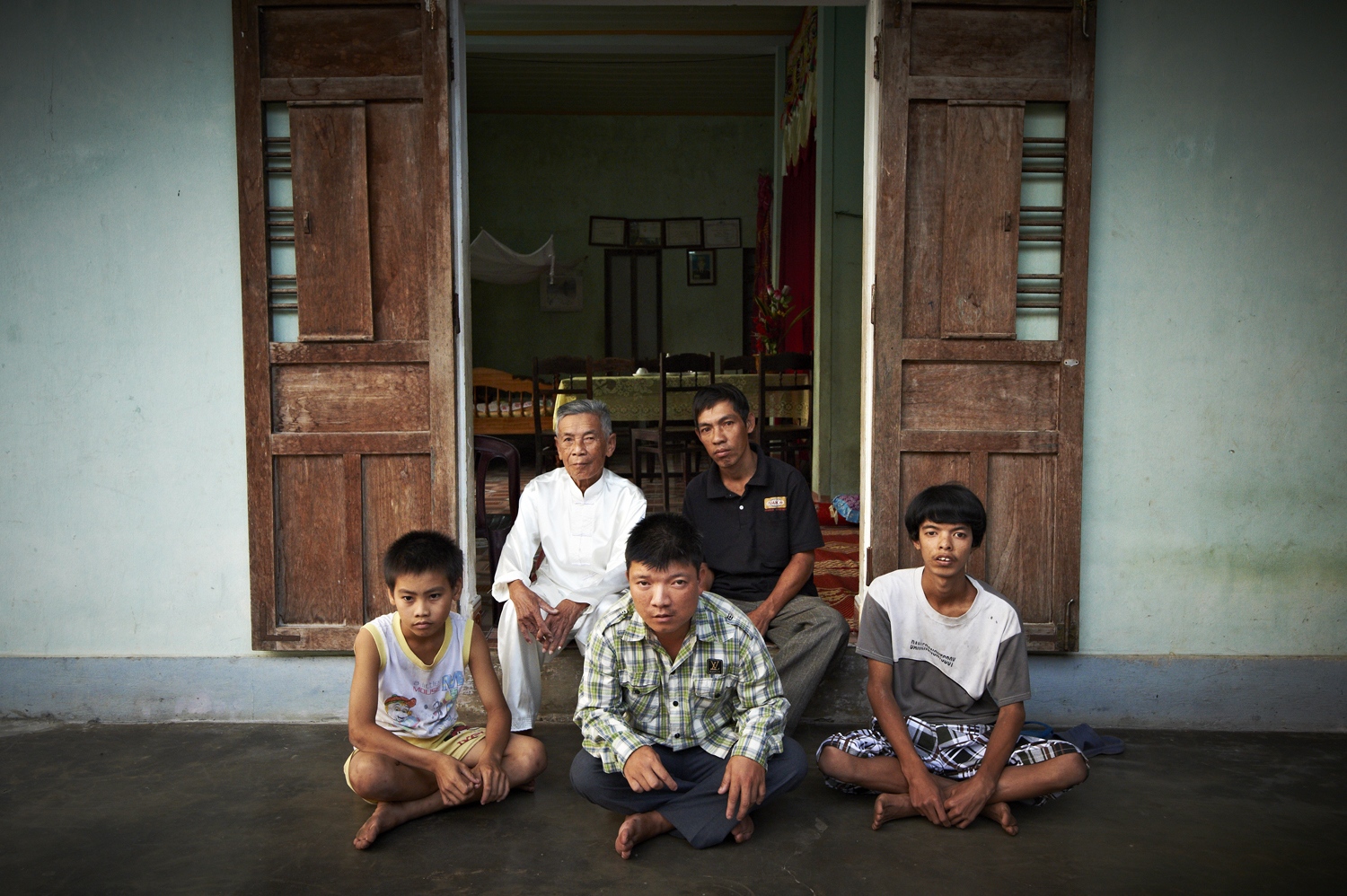 At a quick glance, they seem to be like any other families. But look closely and you will realize that there are three generations of victims of the Agent Orange in the family. The man dressed in white is the grandfather, Hoang Thang (Male, born in 1929), who got hit by the chemical in Hai Lang forest and to this day suffers from serious skin diseases and nervous system illnesses. His son, Hoang Van Danh (Male, born in 1977, top row on the right), has epilepsy with his right leg paralyzed, while his son, Hoang Anh Son (Male, born in 1983, eldest sonâ€™s son), is mentally challenged with paralysis on his right leg and foot. Second sonâ€™s son, Hoang Anh Duc (Male, born in 1994) is hearing impaired and mute. Lastly, third sonâ€™s son, Hoang Quang Tuong (Male, born in 2002) has epilepsy. The pain and sufferings inflicted by the Agent Orange, most unfortunately, are passed on from one generation to the next. (Dec. 7, 2012) 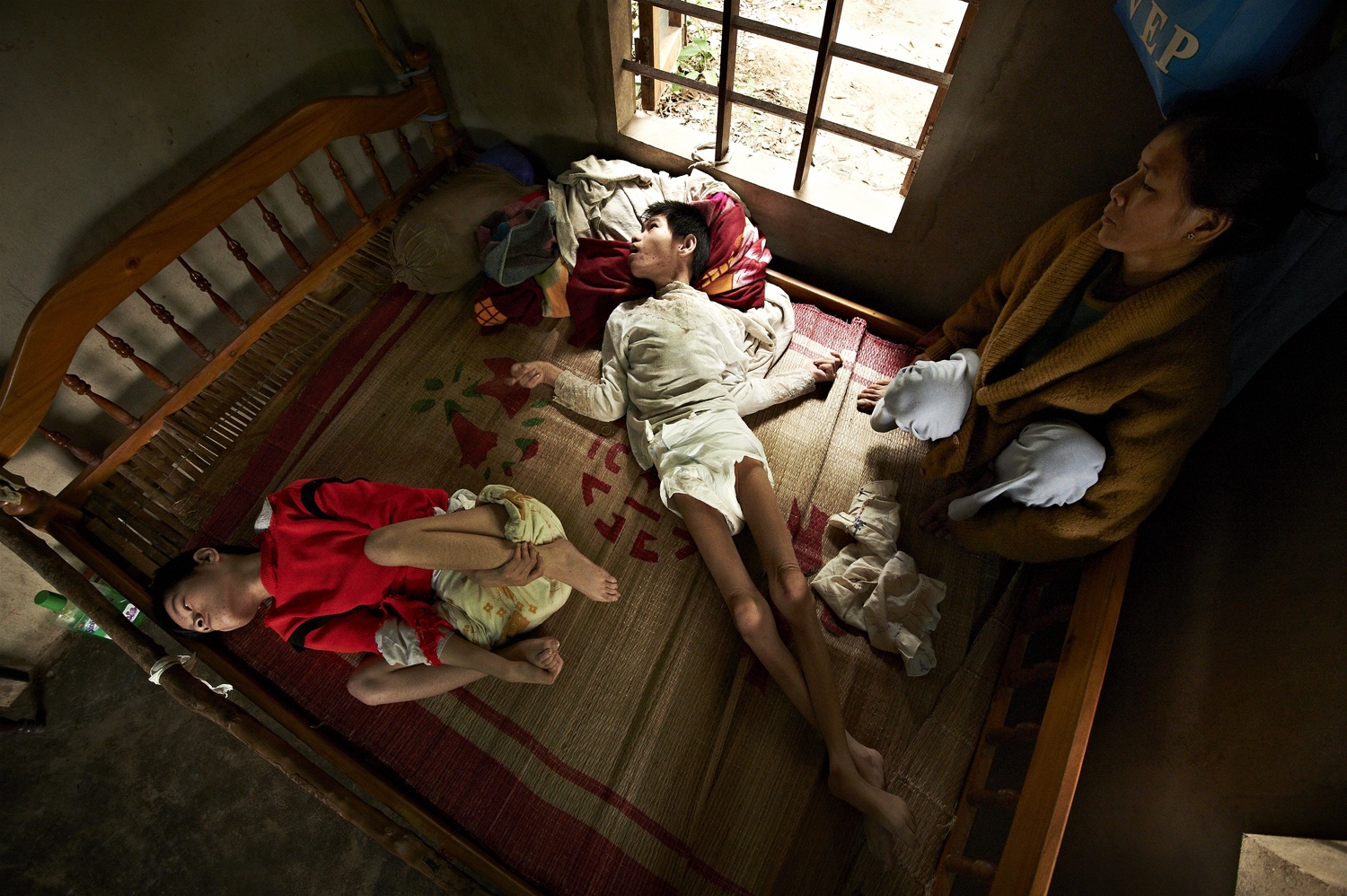 Despite their father being a civilian during the War, when the chemicals were sprayed, he was still directly targeted and hit many times. Their father no longer lives, while his two daughters, Nguyen Thi Tai (Female, born in 1988) and Nguyen ThI Thuyet, (Female, born in 1993), live on with cerebral palsy and with no control over their bodies. These girls who appear to be teenagers are actually young ladies in their 20â€™s whose mother still tends to their urination and defecated diapers. (Dec. 8, 2012) 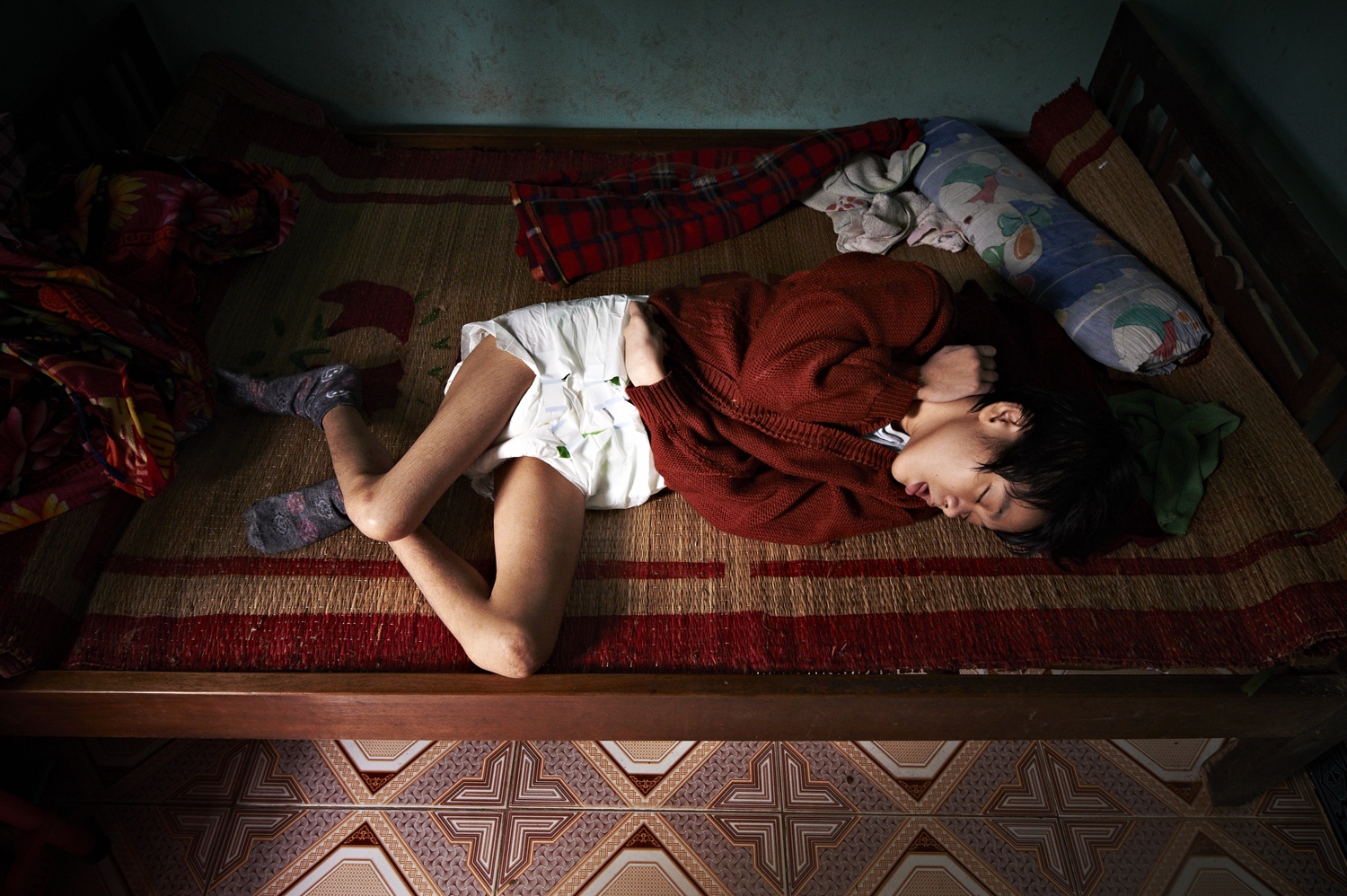 Nguyen Thi Thuyet (Female, born in 1993) has cerebral palsy, with both the parents passed away as victims of the Agent Orange. Currently, she lives with her relatives, where she lies in bed all day unable to move or to relieve herself except on diapers. The Agent Orange affects not only the victims themselves, but goes beyond to those around with the burden of care taking not to mention the psychological devastation. (Dec. 8, 2012) 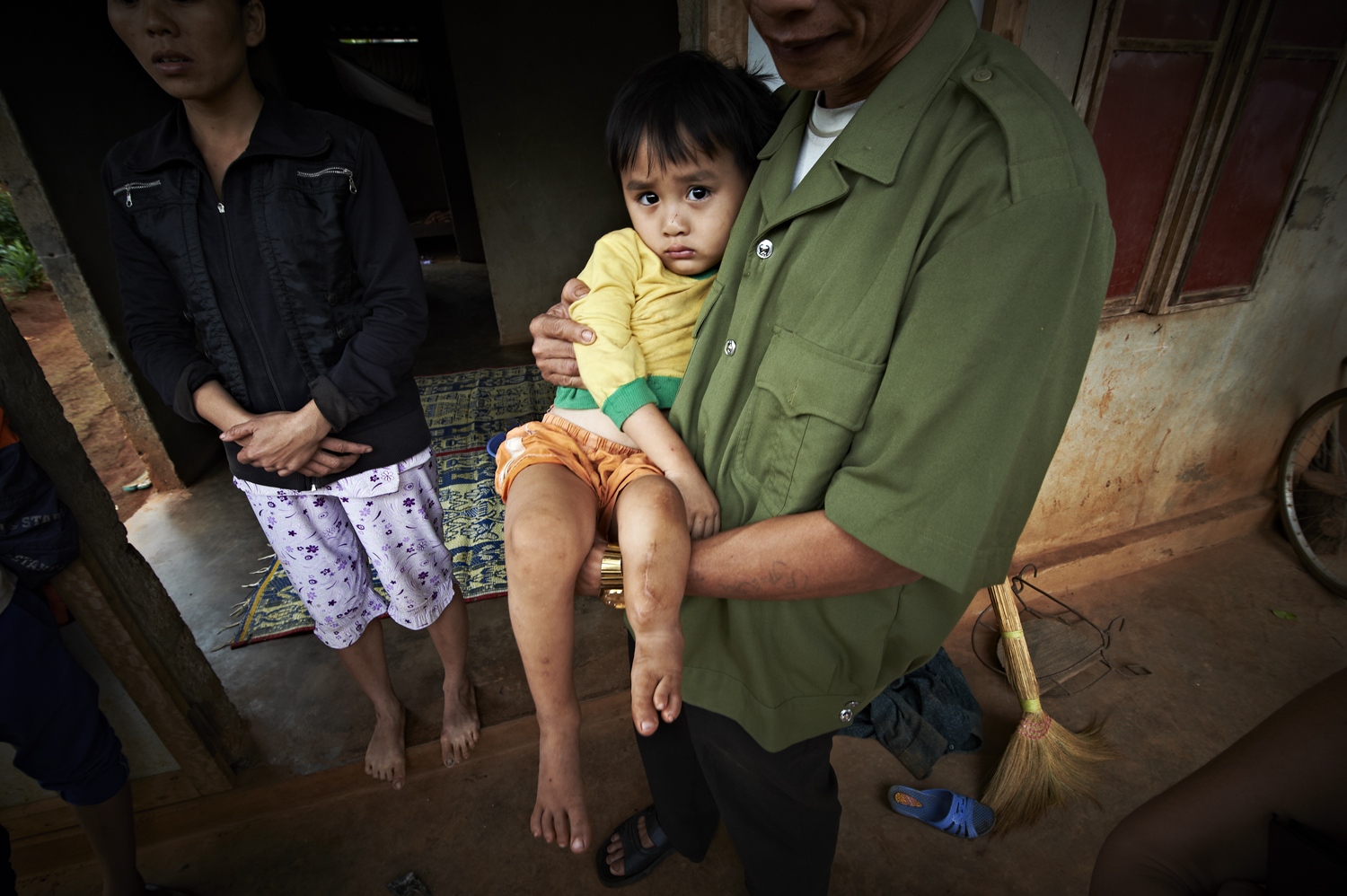 Le DInh Nam (Male, born in 2009) has a congenital deformation, with four toes on the right foot and deformed left foot toes. He has undergone surgery before, but his tibia continue to deform while fibula seem to have disappeared. This boyâ€™s father was not directly involved in the War, but was hit on his shoulder with a piece of land mine that had exploded while cleaning out land mines from an area heavily contaminated by the chemical weapon. This boy is one of the many victims of the environmental pollution caused by the Agent Orange. (Dec. 8, 2012) 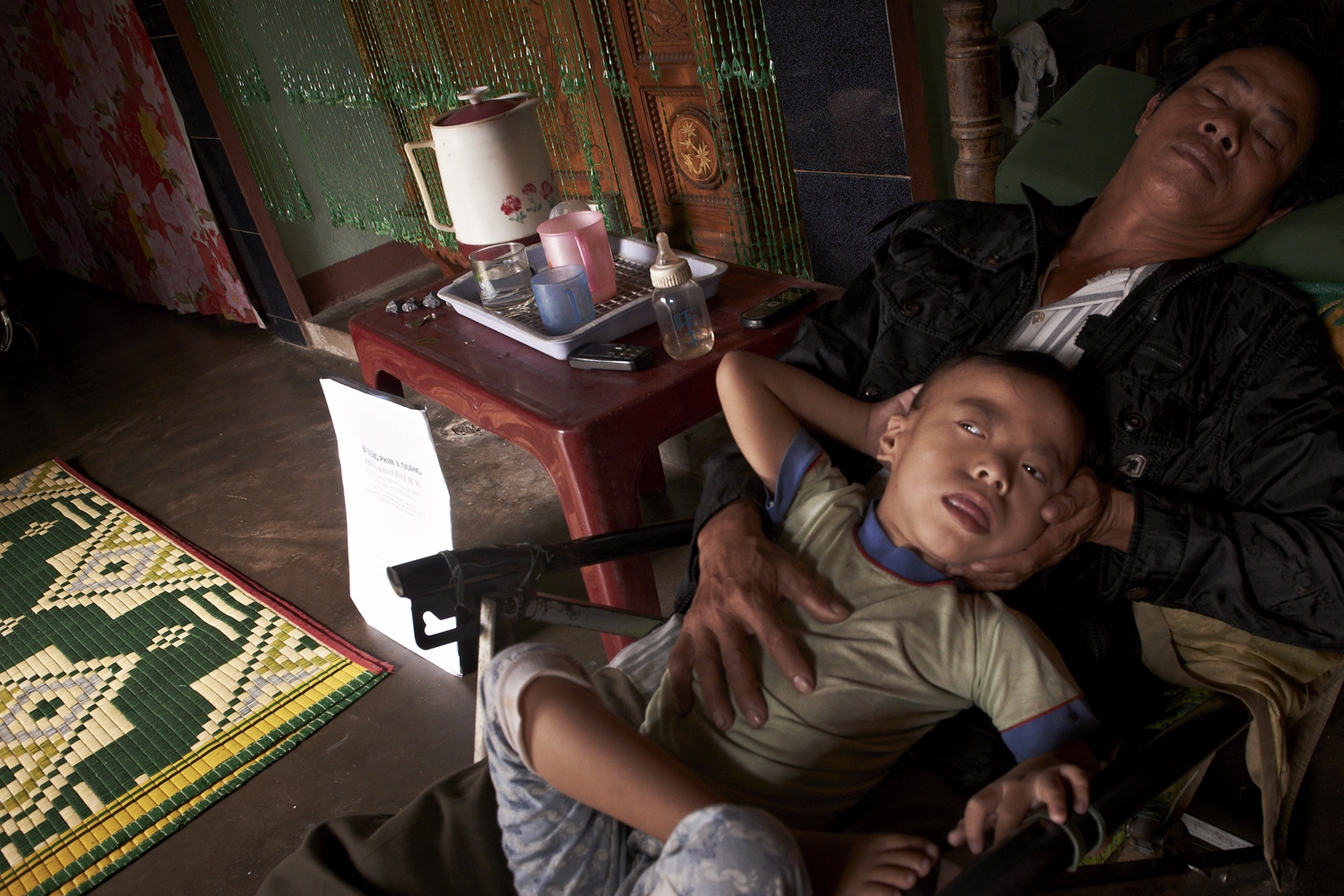 Tran Thi Thuy Linhâ€™s (Female, age 6) father was never in the War but had worked in an area contaminated by the chemical for well over ten years. He no longer works, due to undiagnosed nervous system illnesses that prevented him from working. The daughter suffers from brain lesions. Of recent, they have been determined as victims of the Agent Orange by VAVA (Vietnam Union of Friendship Organization). The Agent Orange gets its alias, Slow Bullet, for its gradual surfacing of effects, unlike the explosives with immediate results. (Dec. 4, 2012) 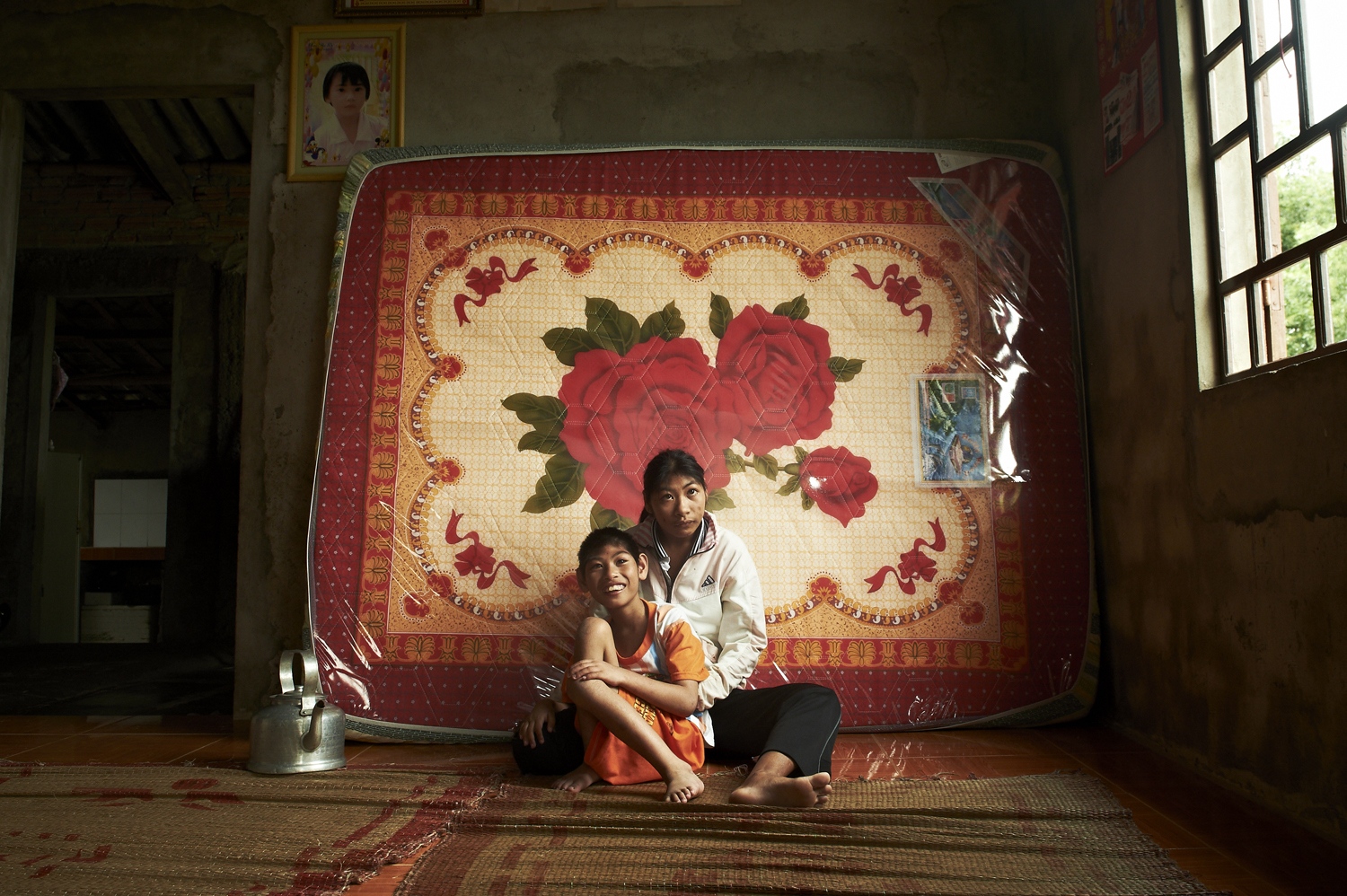 Bui DInh Hoan (Male, age 13) and Bui Van Hien (Female, age 22)â€™s father was a Vietnam War Veteran. On the top part of the picture, you can notice a medal awarded to War veterans hanging on the wall. They are suffering from microcephalia, which causes their mental capabilities to fall far short from that of a normal person, and triggers monkey like behaviors. I have noticed many others with similar symptoms around the neighborhood. (Dec. 4, 2012) 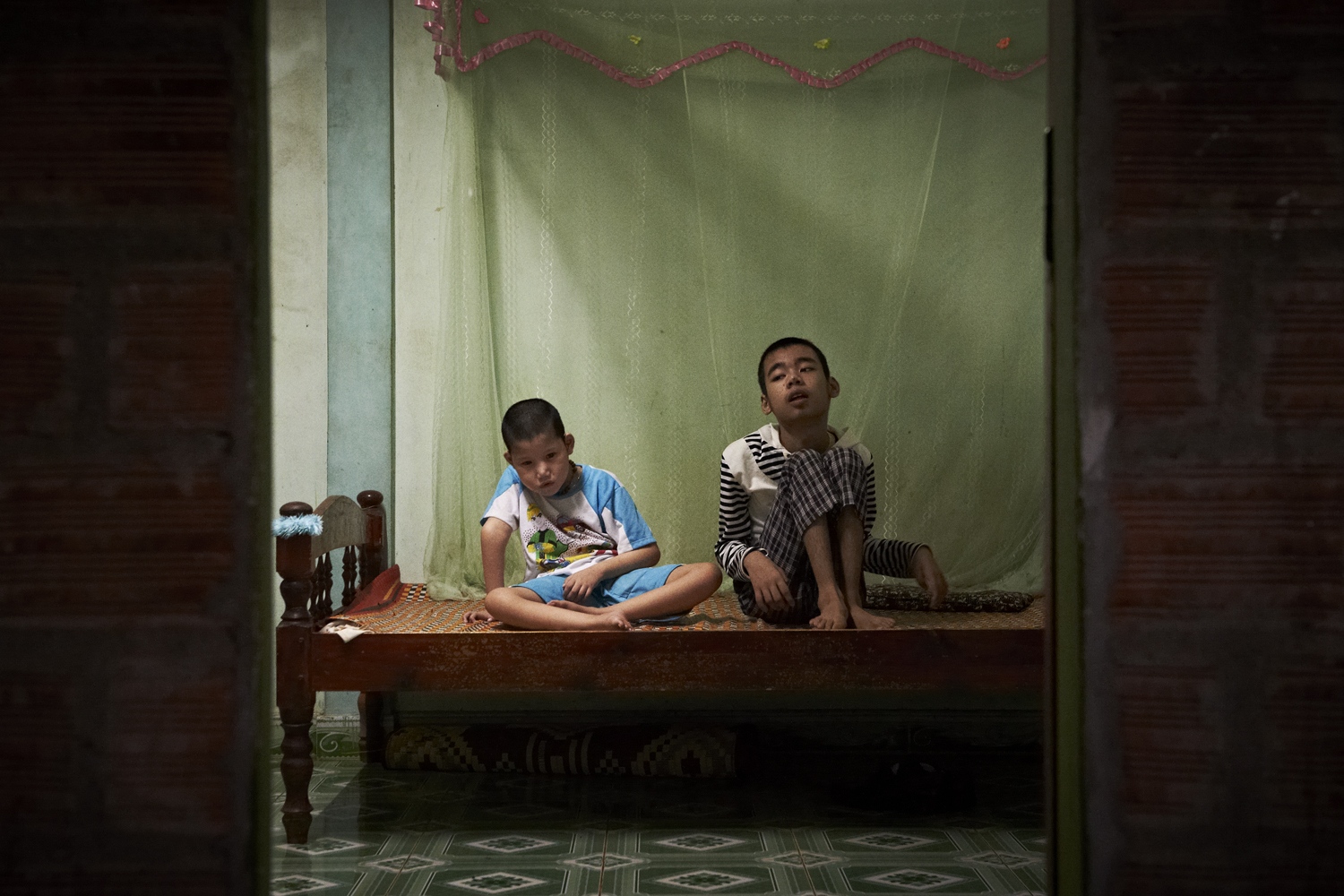 Hoang Van Binh (Male, age 12) and Hoang Van Nhat (Male, age 13) are cousins. Both have cerebral palsy, with inability to communicate and walk.

They rely on the wheel chairs that were sponsored by South Korean NGO to move around. Both their fathers seem normal, but have been working extensively in heavily contaminated areas, and have been consuming food products that were produced from those areas. (Dec. 5, 2012)

Youngho Kang was born in 1970, Seoul, South Korea. He is well known as a commercial photographer in South Korea. His nickname is â€œDancing Photographerâ€, a nickname given to him because of his unique shooting style, which is that while taking pictures he communicates with the model through dancing, or very much as a conductor, with music always playing in the background.