My name is not "Street Child"

I am currently in the process of making a documentary work titled "CHILD". Starting in October 2015, I met and interviewed "Khates", which is what the locals calls "Street Children", in Kathmandu, Nepal. My intention is to change the social awareness about these abandoned children.

The children are an obvious part of society, which means they are worthy of the protection of adults.

This made me think it was necessary for them to reveal their existence and stories by themselves, as far as they are willing to show, because they are not the criminals.

The amount of children living on the streets is believed to range from tens of millions up to 100million, according to estimations by UNICEF, 2005. These children exist everywhere.

A general agreement about "street children" is that they are boys or girls, under 18 years calling the streets their homes, they live and make a living there. These children are without proper guardians to oversee them.

Realizing this, I took it to myself to visit a city where street children are common, yet invisible. This led me to Kathmandu, Nepal, the first time in October 2015, and the second time February 2016.

Meeting the children I asked for their name and age, which later resulted in long exchanges of stories, dreams, regrets, friendships, experiences and much more.

They are regarded as orphans, even if they have parents. The usual reason to run away from home was parents abusing drugs/alcohol and violence, or at times poverty.

The streets were their choice, their freedom.

Their ages ranged from 5 to 14 years. Few children knew of their birthdays. Many children smoked and even more sniffed glue. The glue helped them escape reality, hunger, shame, and also worked as medication. They made money by begging or collecting garbage.

None of the children wanted an adult life on the streets, they all had dreams/ambitions. This meaning they want an existence in society, an identity to be recognized by.

Apart from meeting the children, I also met with NGOs and presented my project.

My idea was to change the social awareness about the children and make them members of society. These actions were only possible if the children agree to reveal their existence and stories. The NGOs were against my idea and project, because of human rights.

As I had studied about NGOs methods of promoting through images, I could recognize their good intention. Their goal was to help the children and for that they needed donations. However the methods had a broken balance between NGOs (helpers) and children (beneficiaries).

The first point is that the perspective of the camera was focusing on the NGOs and their activities. Their promotional images look more like self-portraits. The images are showing more of "This is what we are doing" than actual objective facts.

The second point is that the eyes of children are hidden and faces blurred. The children can be seen as negatively/socially anonymous people, not as regular individuals. Subconsciously it created a hierarchy between the NGOs (helpers/general people) and the children.

The way to respect human rights can be flexible, through discussions. NGOs tend to apply one rule to all occasions.

My work is kind of documentary work, from facts. Reason for "kind of" is because my work is not perfectly journalistic, and also not perfectly sharing perspectives with NGOs. My main concern is balance.

On the other side, NGOs pictures have the intention to protect and care for their victims. Their pictures extract sympathy. They edit and present in order to get donations for charity. The result being that reality and facts can disappear, leaving viewers believing beneficiaries only have poverty and sadness.

I try to maintain the goal of NGOs, in the place of a journalist. I am neither a journalist nor a NGO photographer, so if I had to categorize my approach it would be as "journalistic charity".

I want to grant the children their desired social existence through my works. I am convinced that the small interest I paid them could make them better and help reduce their numbers. My project is a mere start to express concern about them. 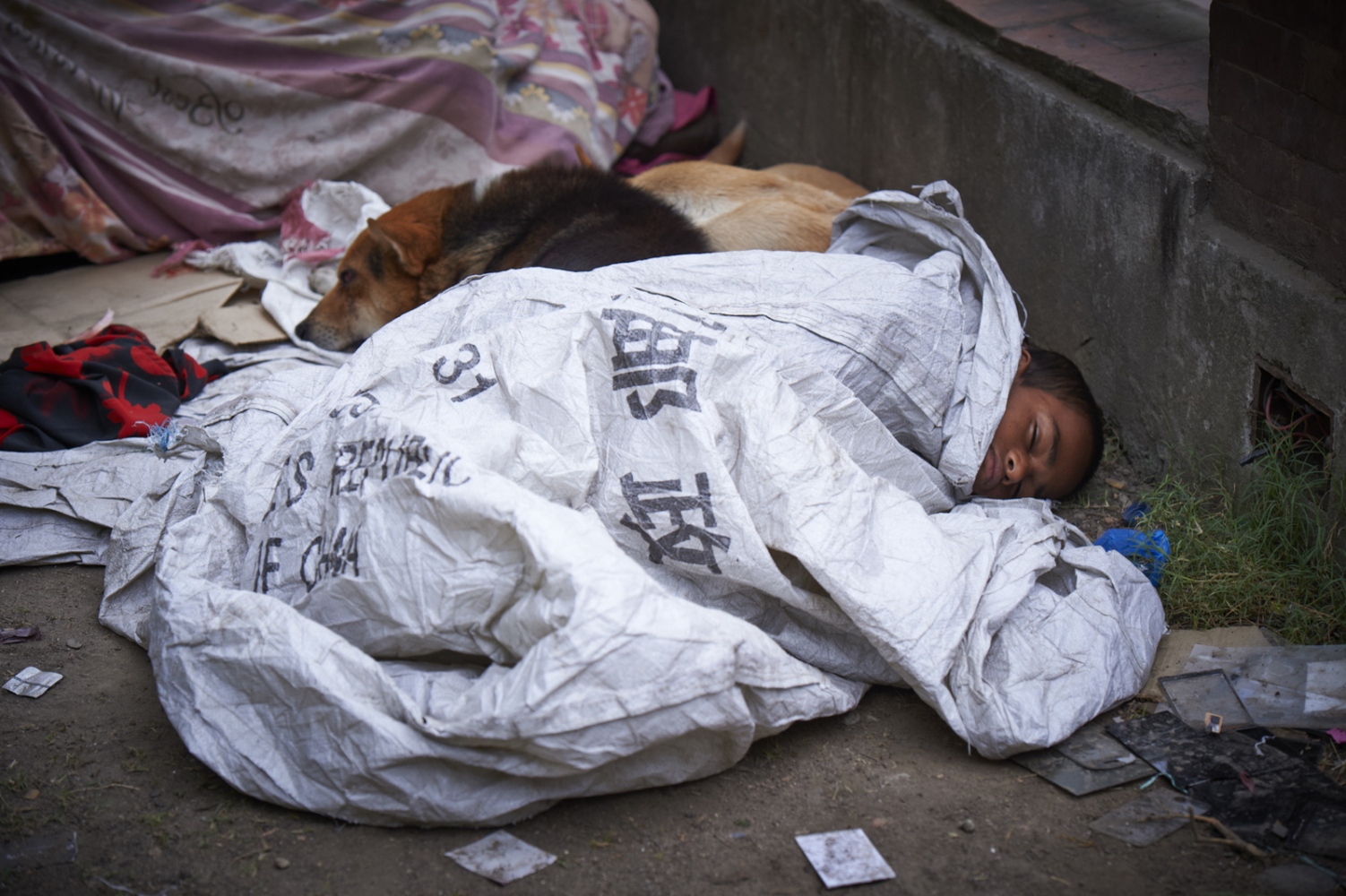 Captions
Suraj (14) has an alcoholic father who also is violent, so he does not want to live with his family. He has lived on the streets of Kathmandu for about 8 years. 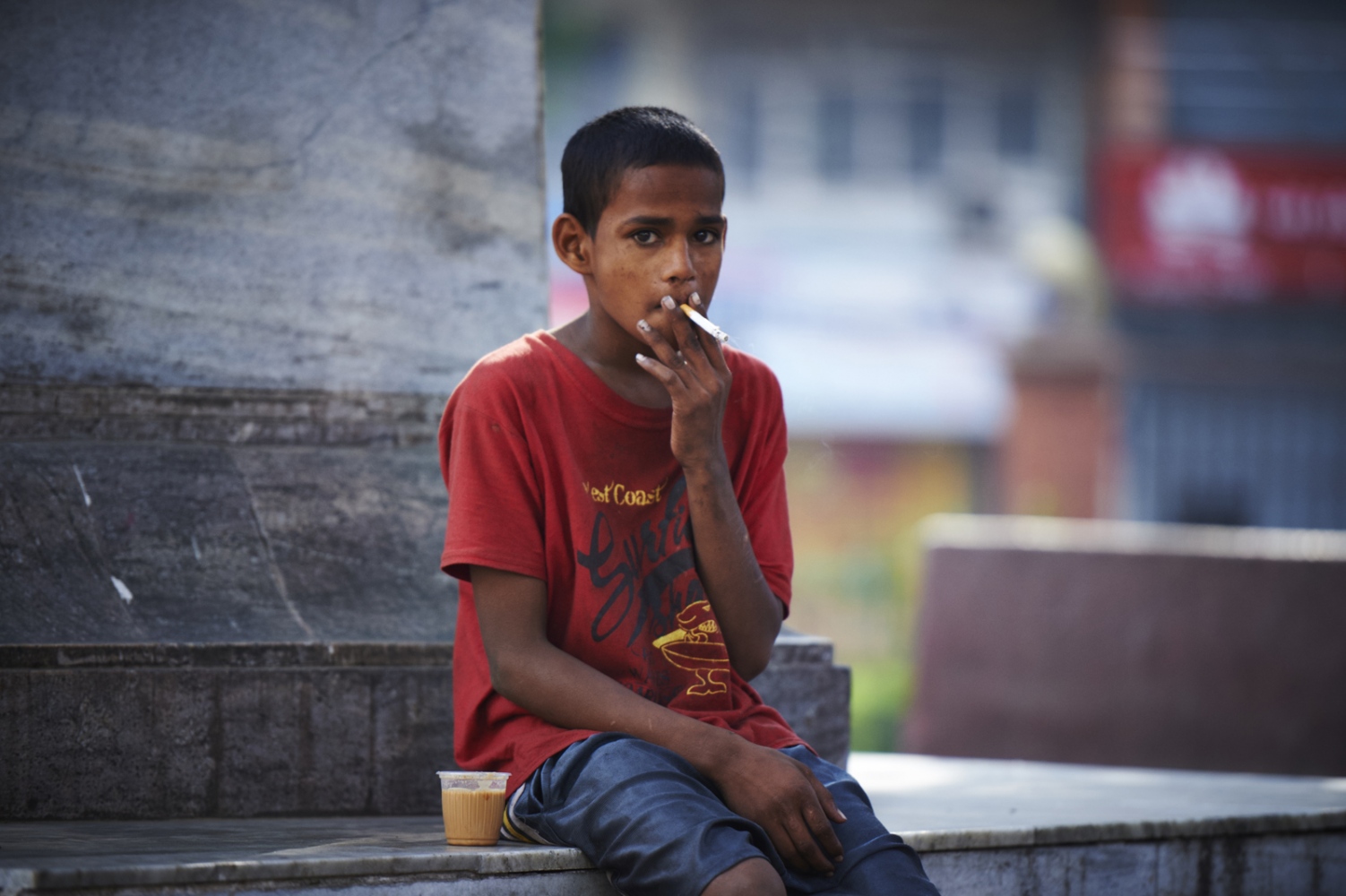 Captions
Suraj (14) is dreaming of becoming a bus conductor. His motivation he said, is that bus conductors always seem to have their hands filled with money. 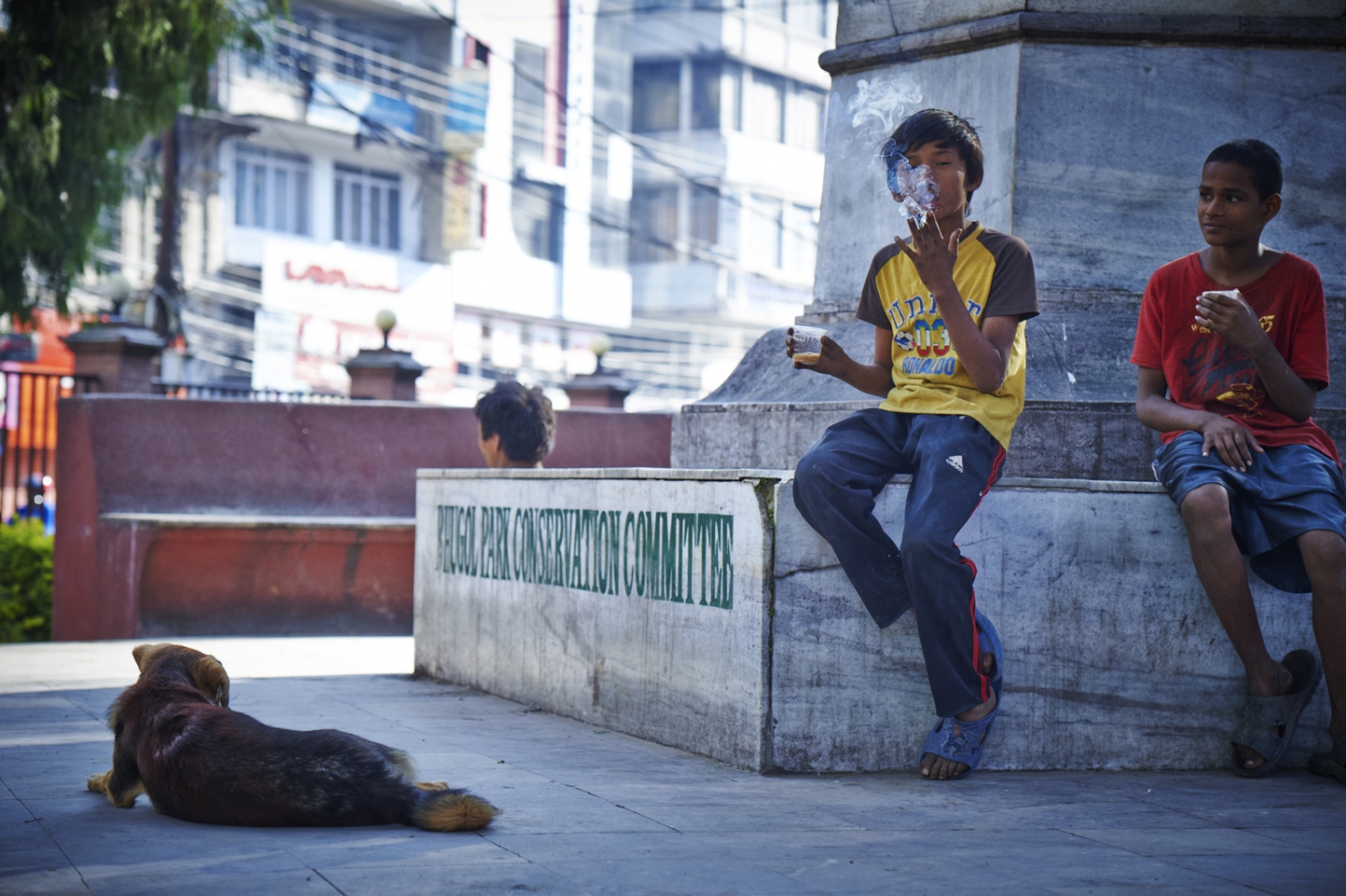 Captions
Bilan (14, in yellow) was one of few children who knew the exact date of his birthday (9th September). He said that he had lived on the streets for 5 years. 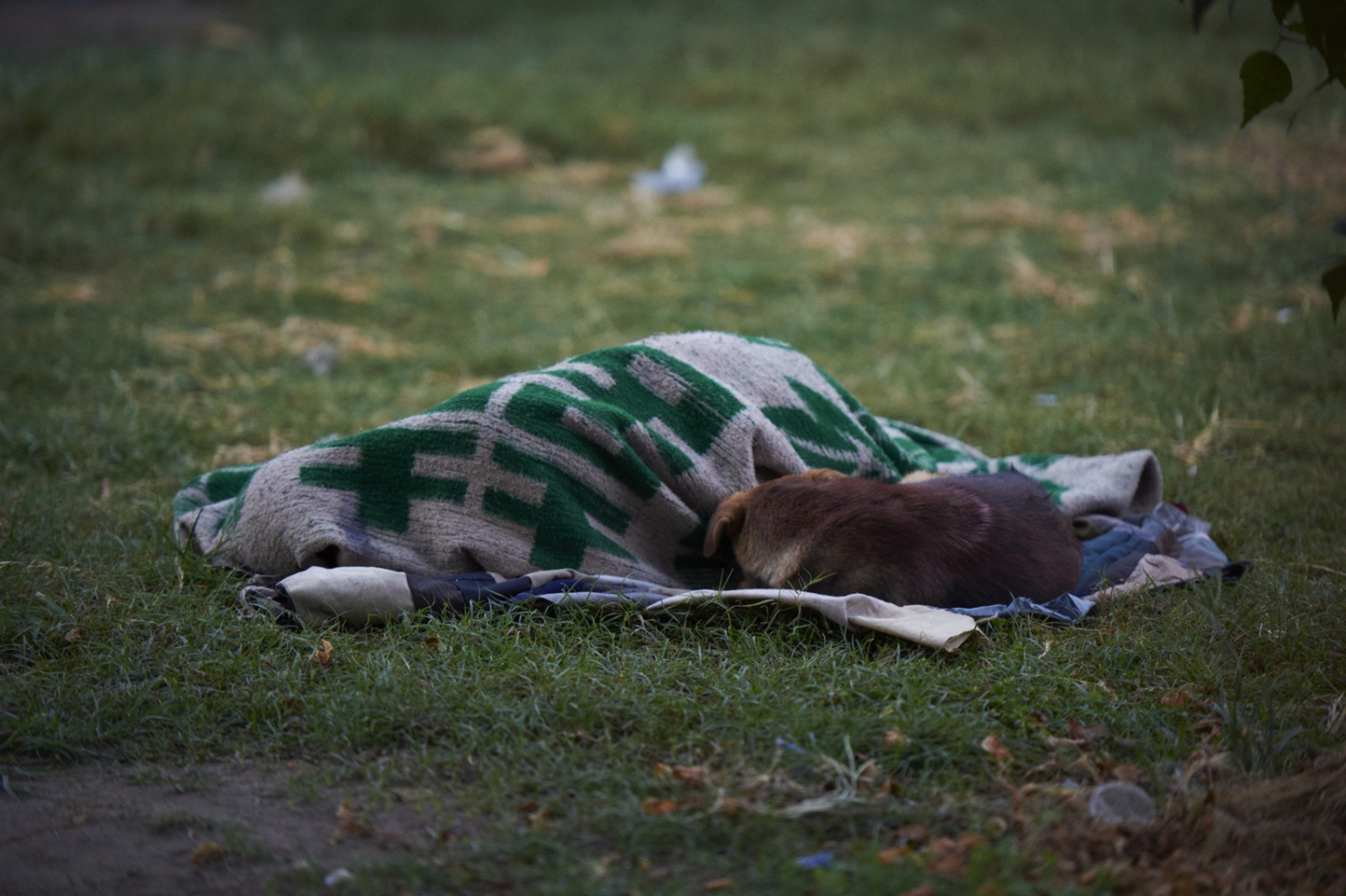 Captions
Bilan (14), sleeping with his dog in Bhugol Park. 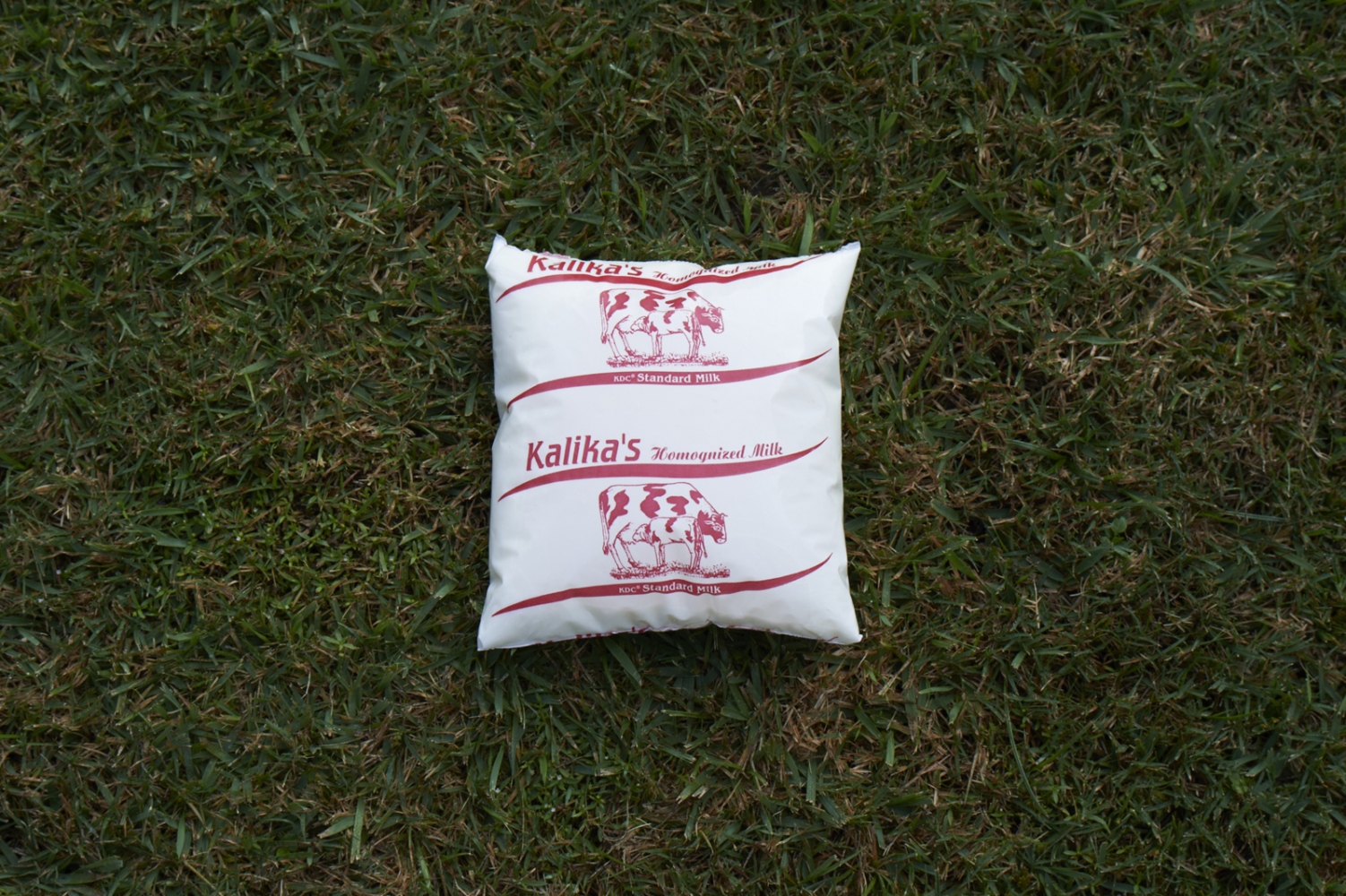 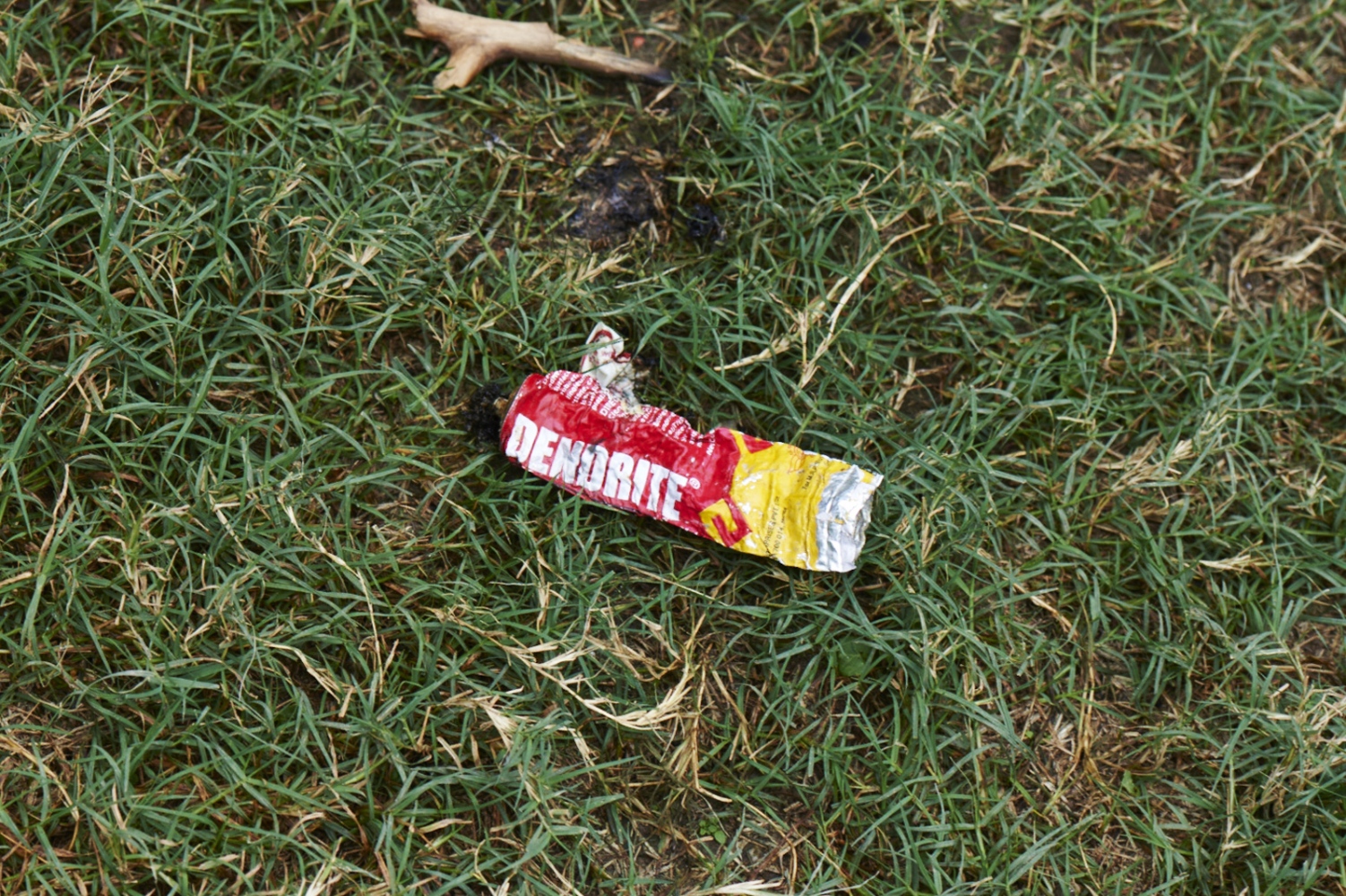 Captions
This glue is usually found around the location of street children.The children purchase it from local stores. 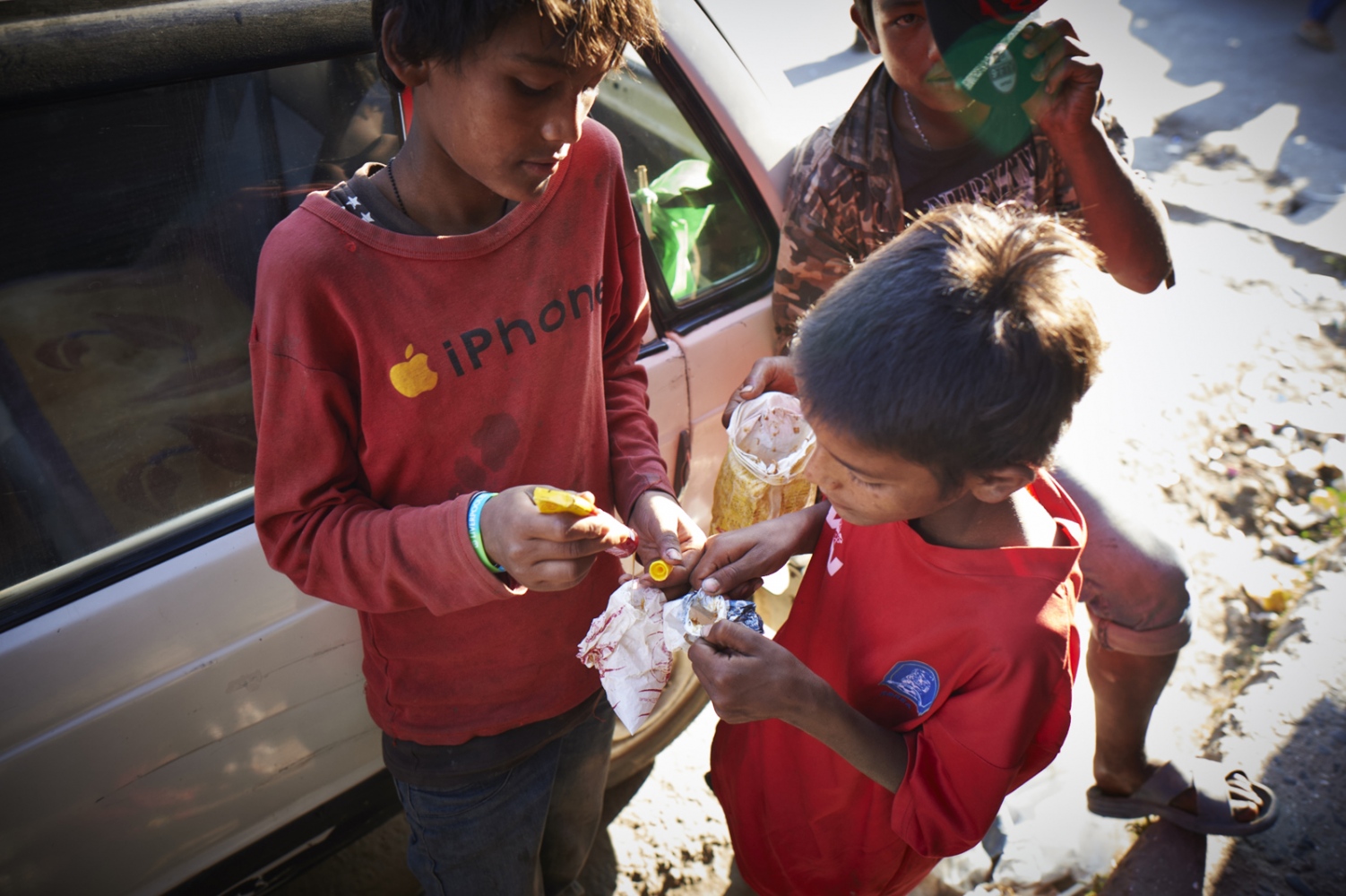 Captions
Milan (14) was pouring the glue into the milk vinyl together with his younger brother and friend. 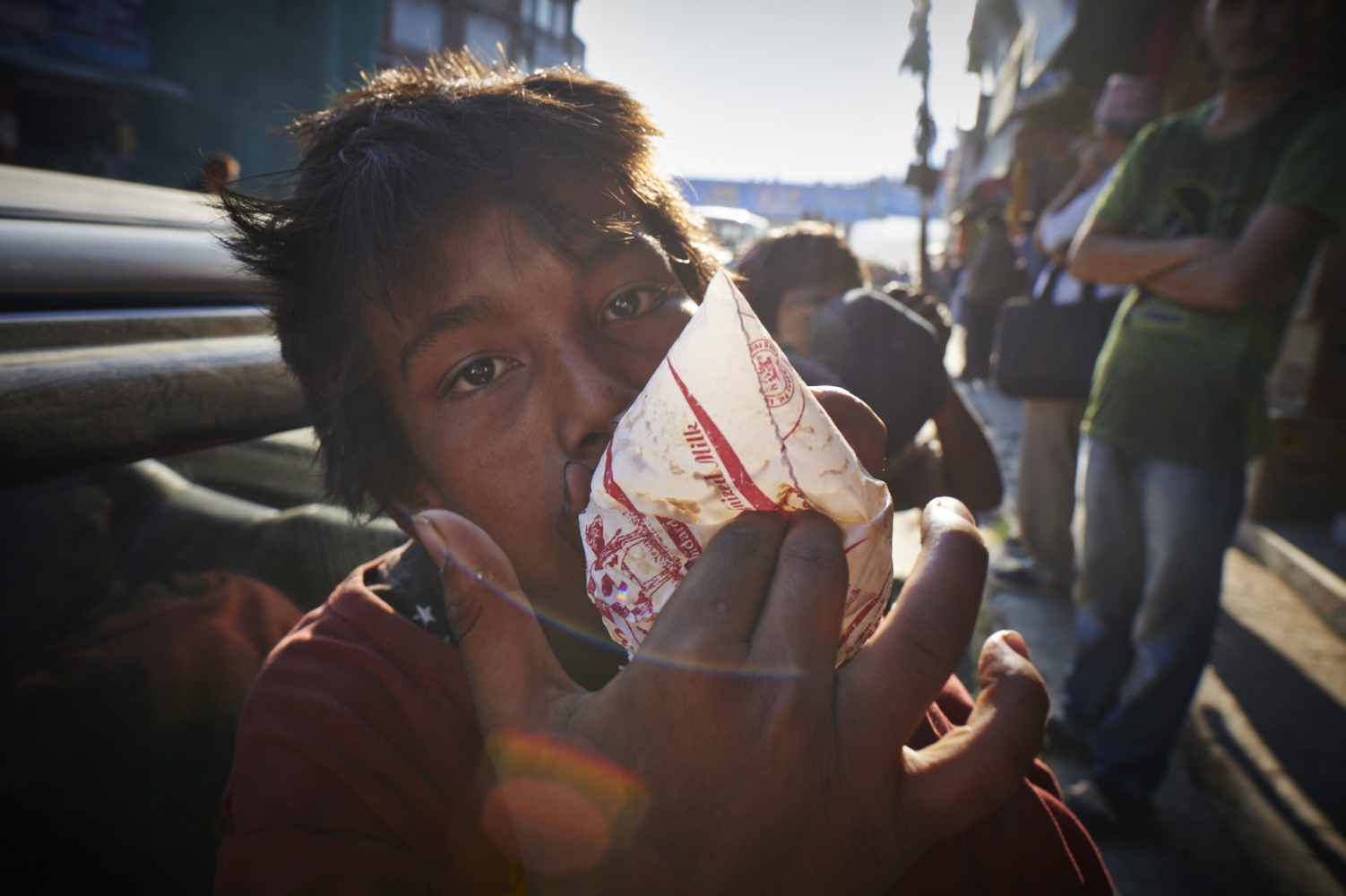 Captions
Milan Pandey (14), said that he has been sniffing glue for 9 years and that it helps him forget about his hunger. 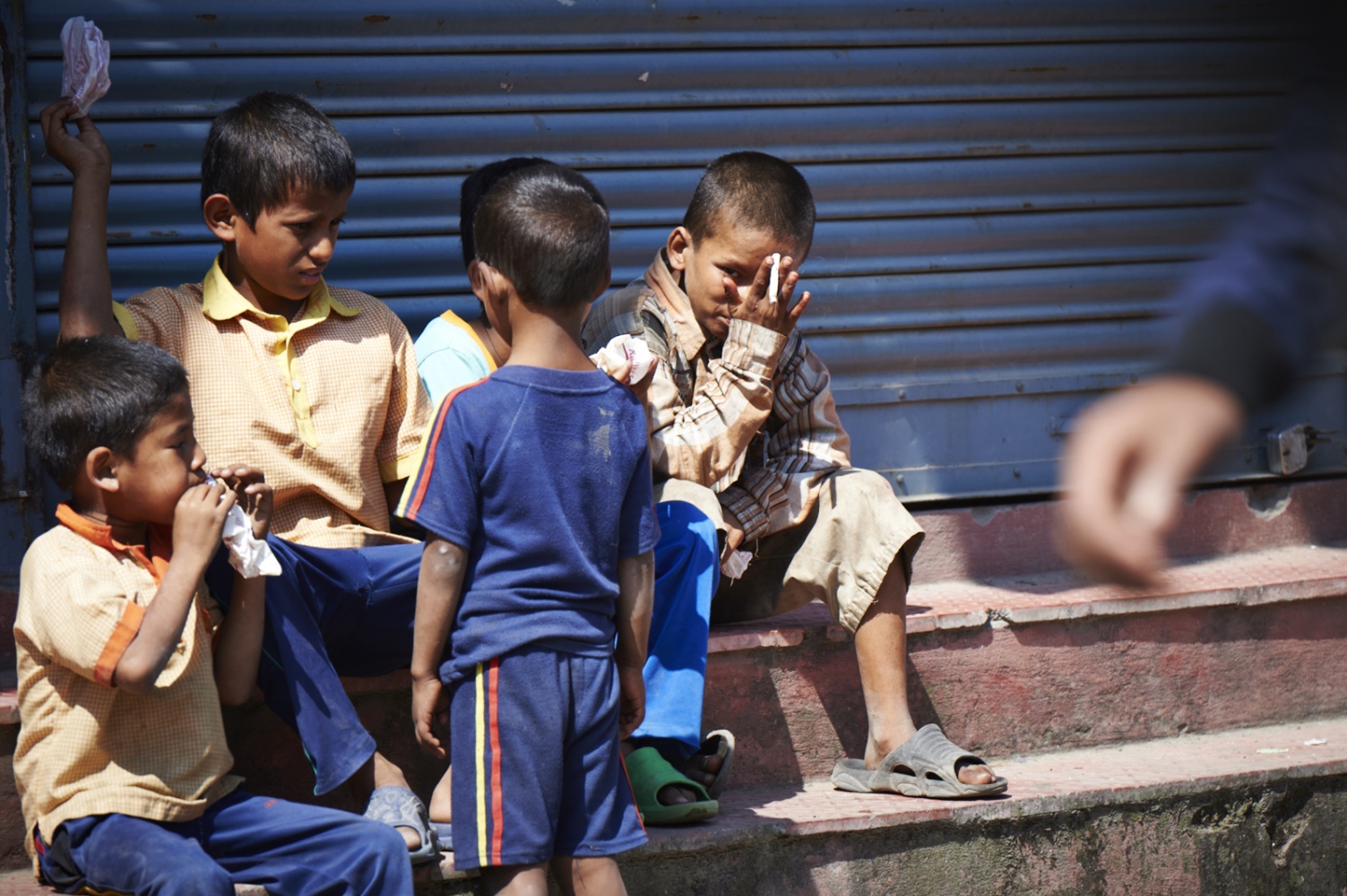 Despite being children, the attitude of the children is that of adults. 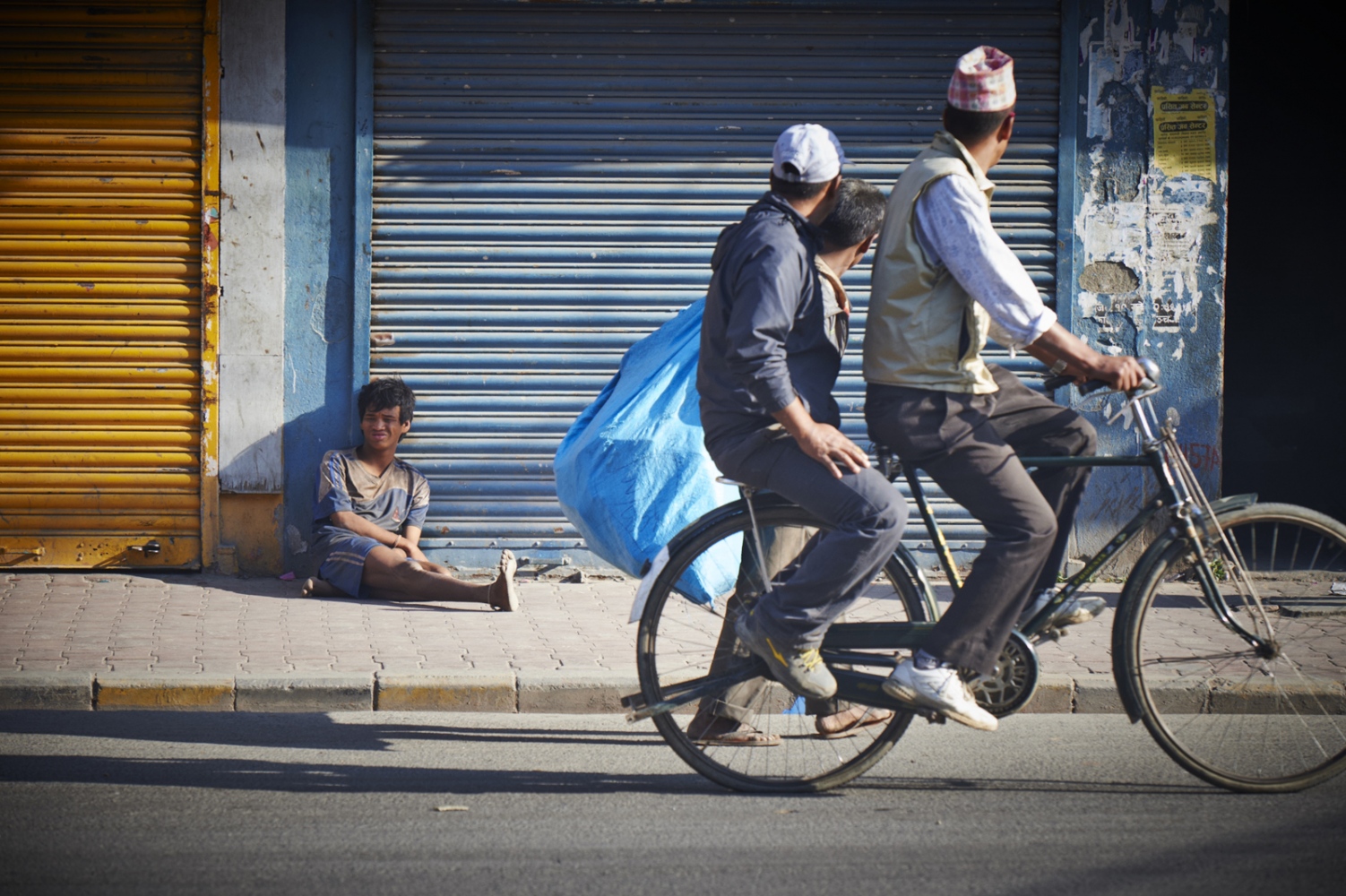 Because people experience these sights often, such as this one of Bunam (17), they pass the children without stopping. 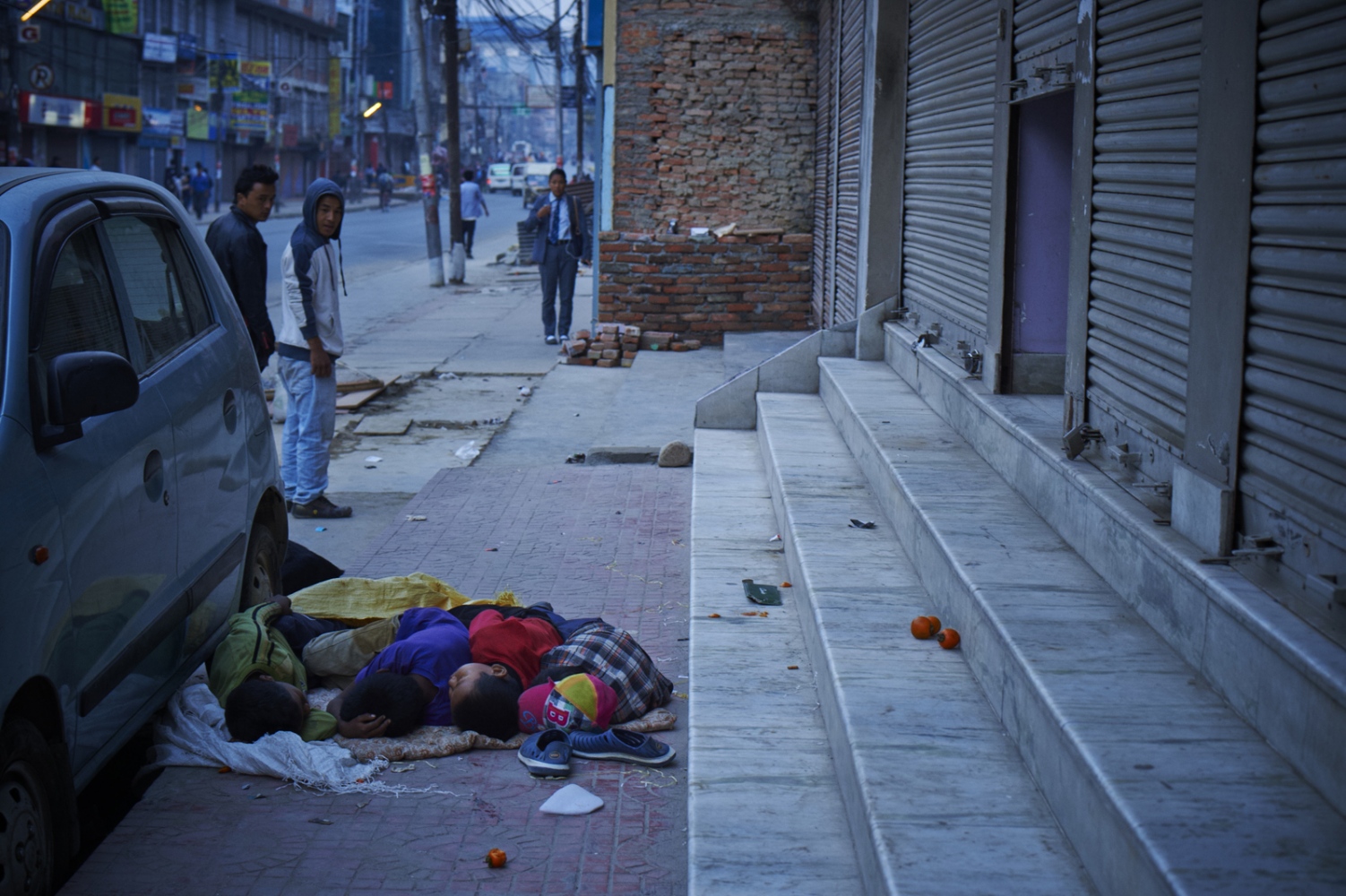 Captions
Children sleeping on the streets are a common sight, but it is actually dangerous. 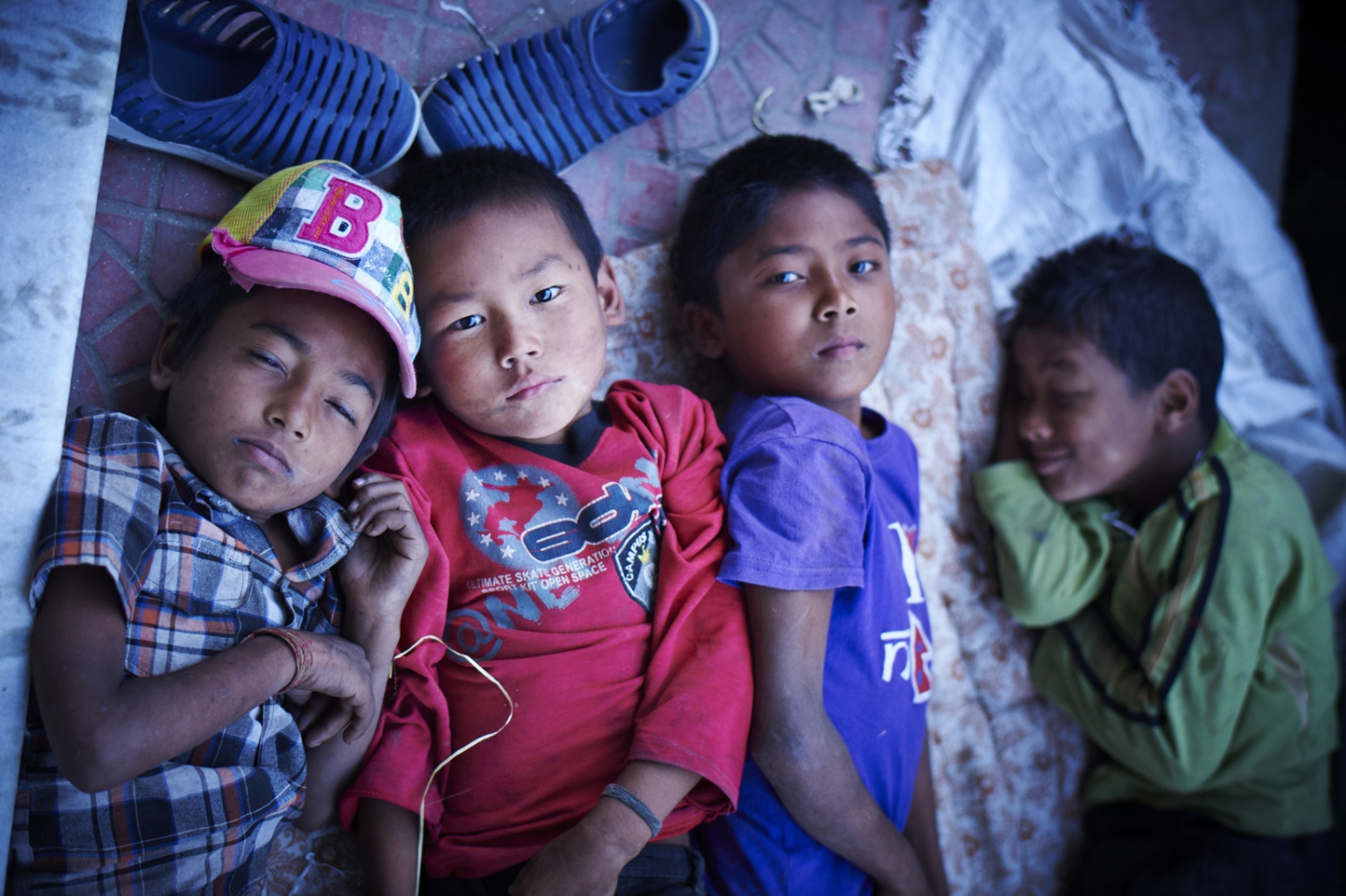 The children in the image all look too small for their ages - common sense says that these children should be at home. 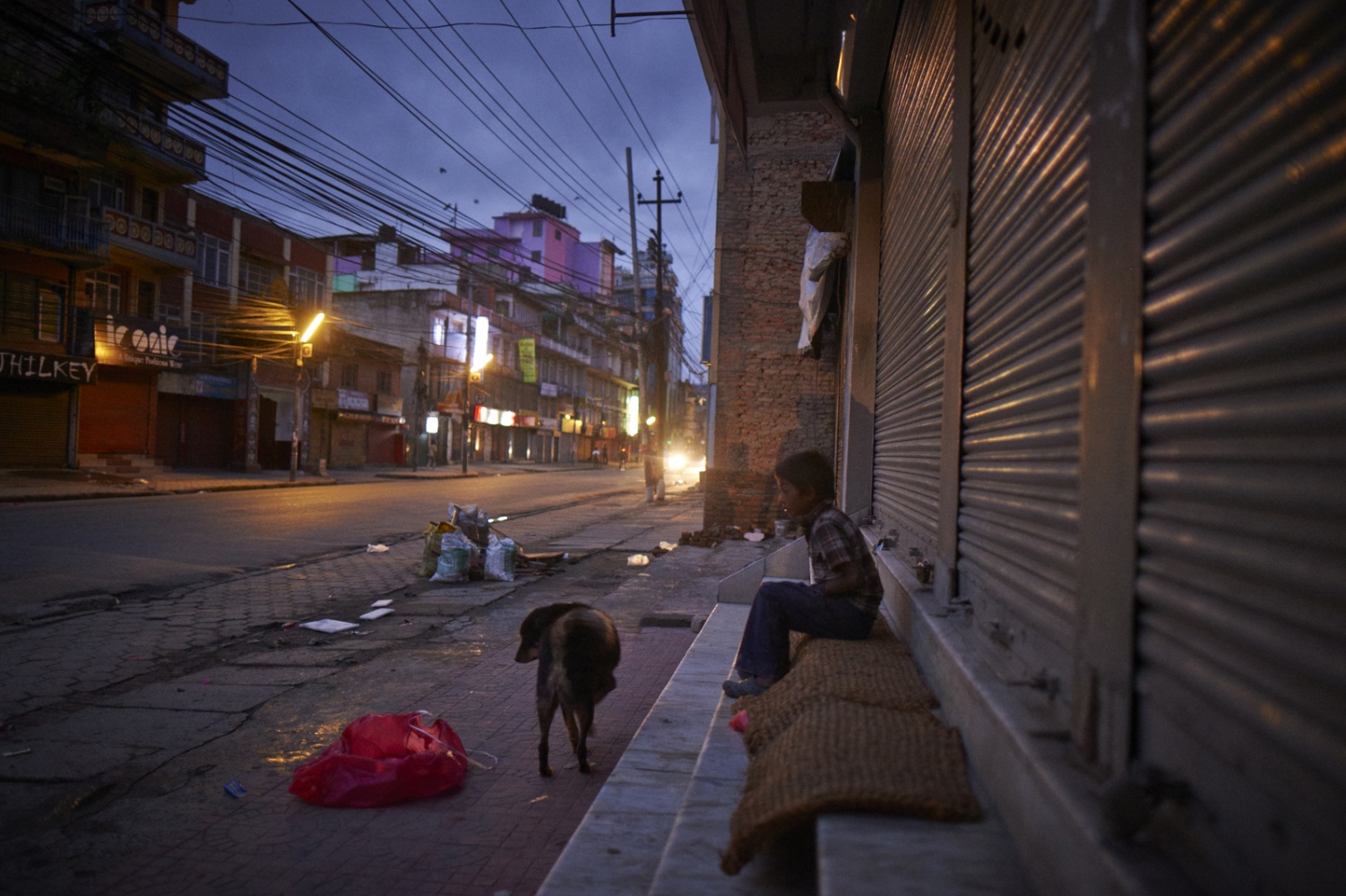 Captions
Tilak (10), did not know anything about his parents. He had been living on the streets for 7 years from what he recalls. 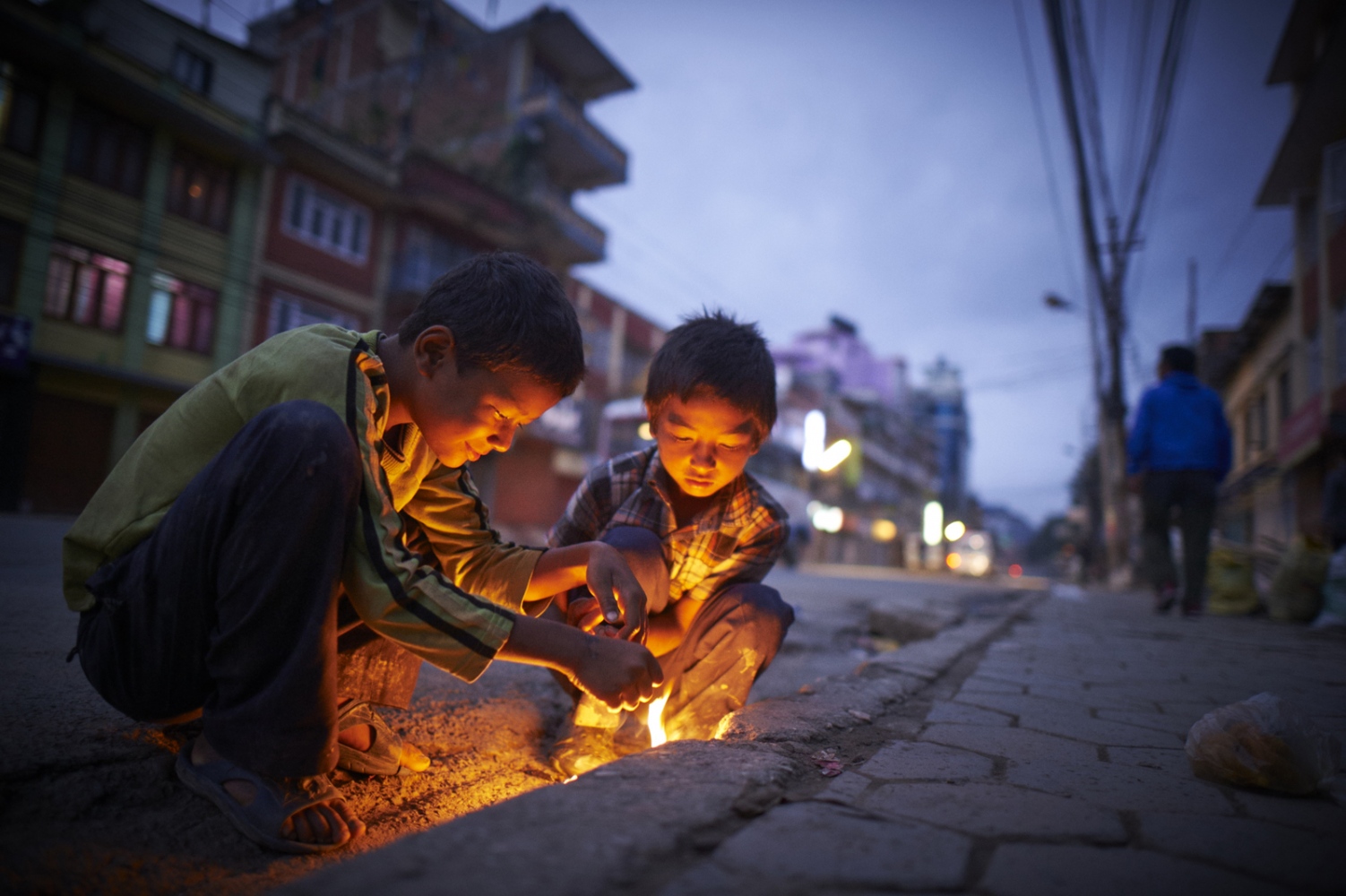 Captions
Tilak (10, right) and Ashish (left, 10) live a hard life on the streets, without any tools of convenience - these children have to make their lives by themselves. 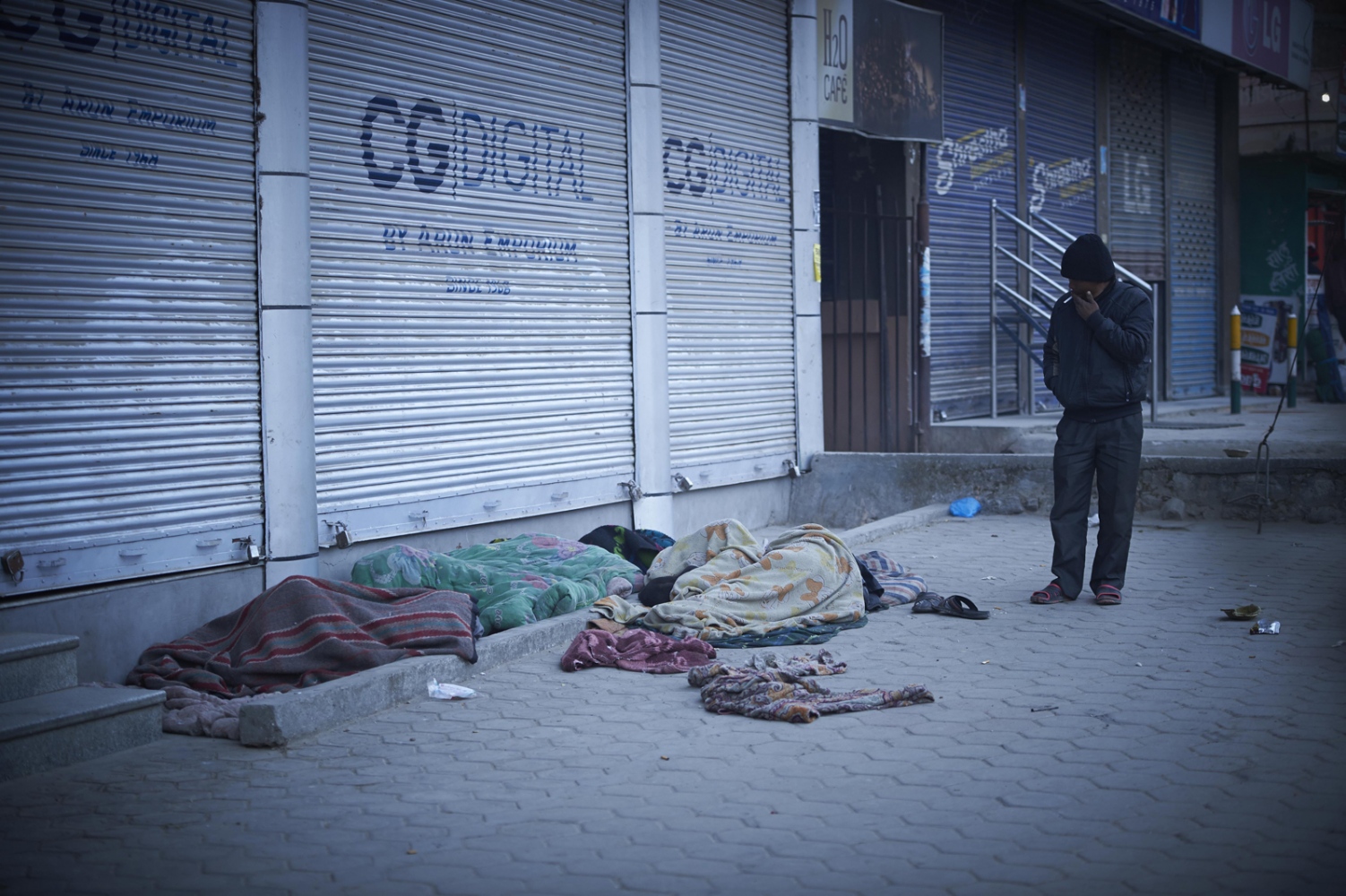 Captions
In the cold morning 8 children were sleeping in front of a local electronic store, in the middle of the city. A man is looking at them, with curiosity.Â 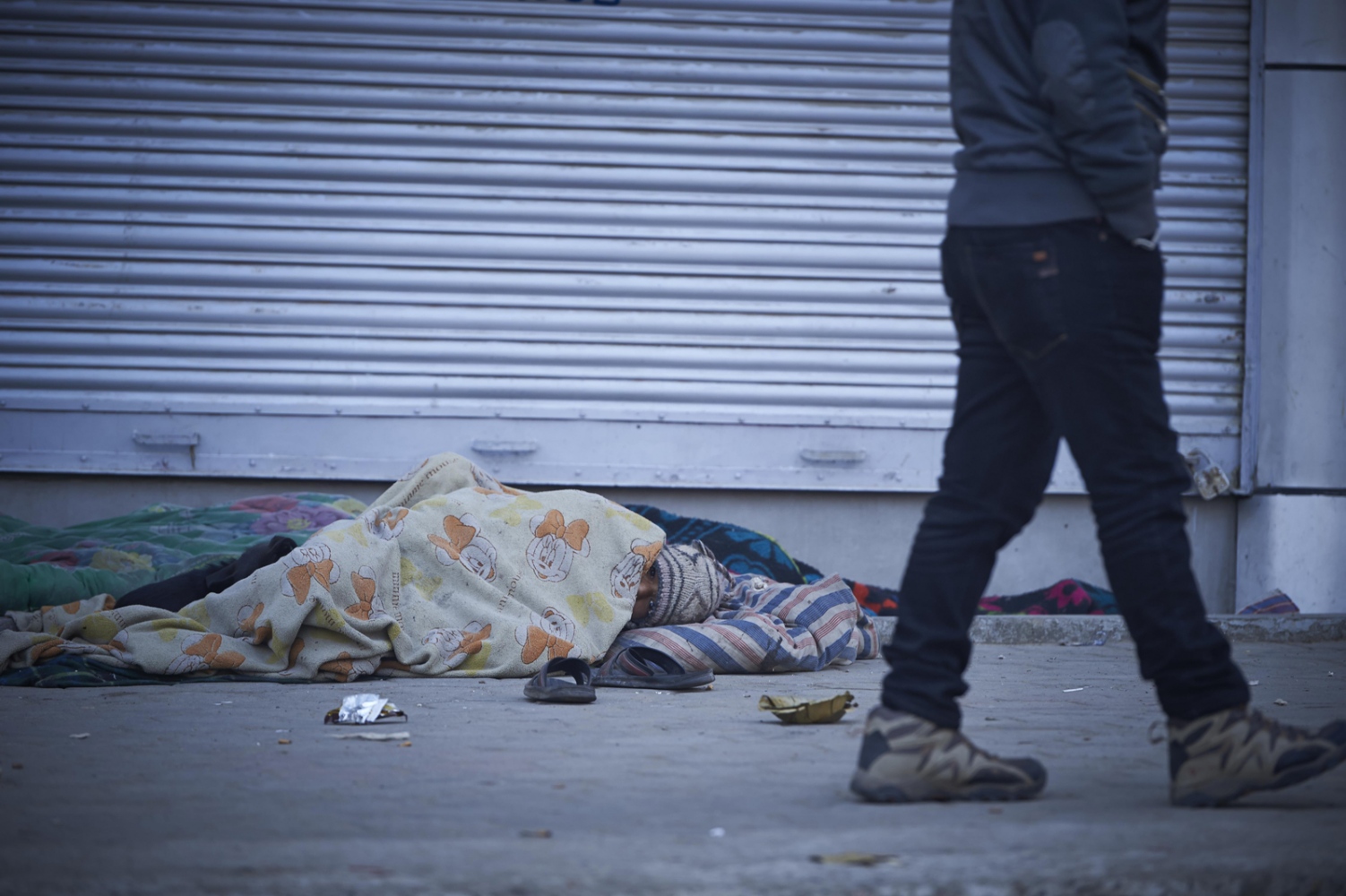 Captions
Even though they are sleeping on the streets, this specificÂ space is what they call "home".Â 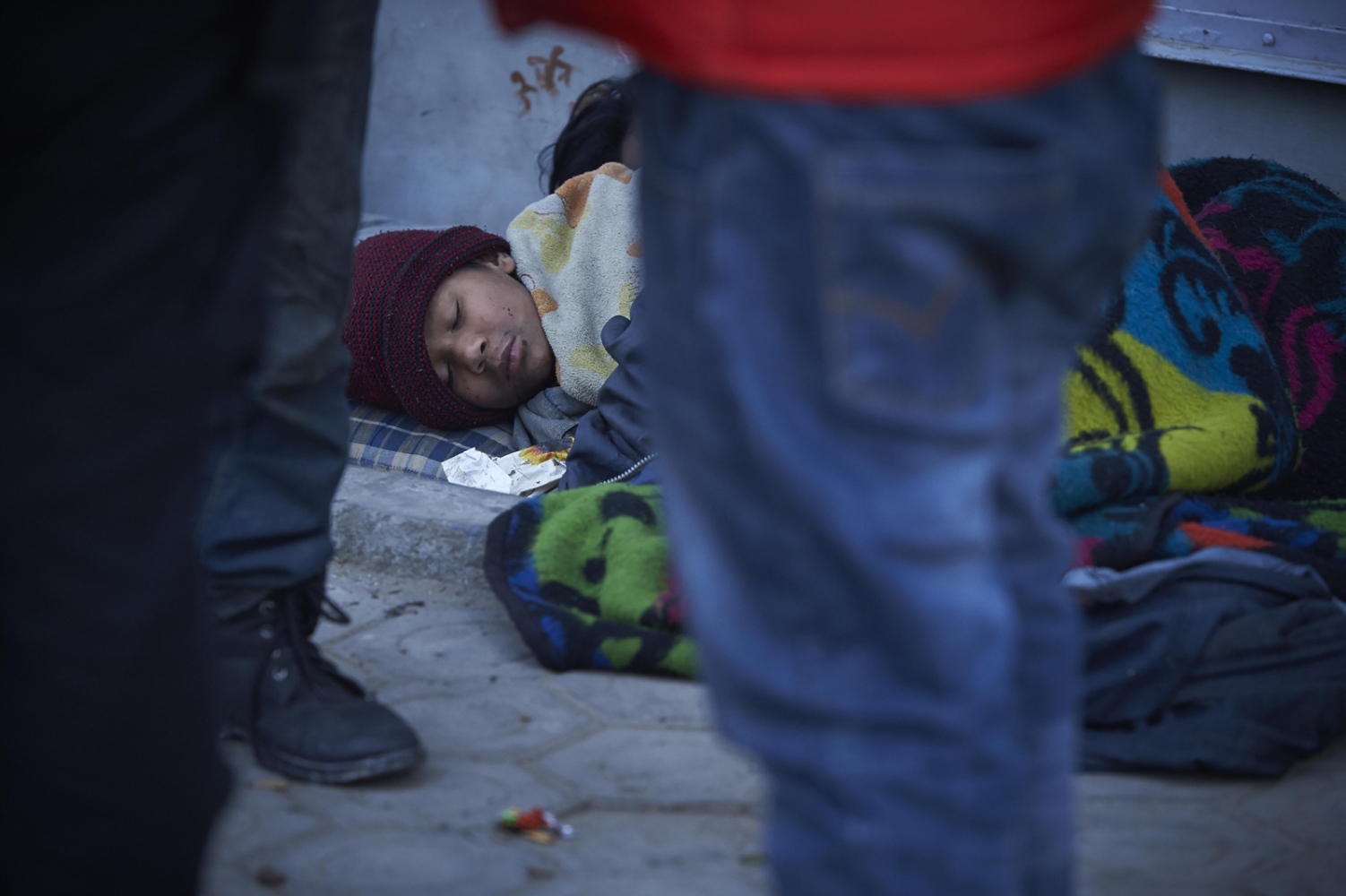 Captions
Ashish (11),Â looks like any other child you could see at home, a child that wants to sleep more. A child being a child. 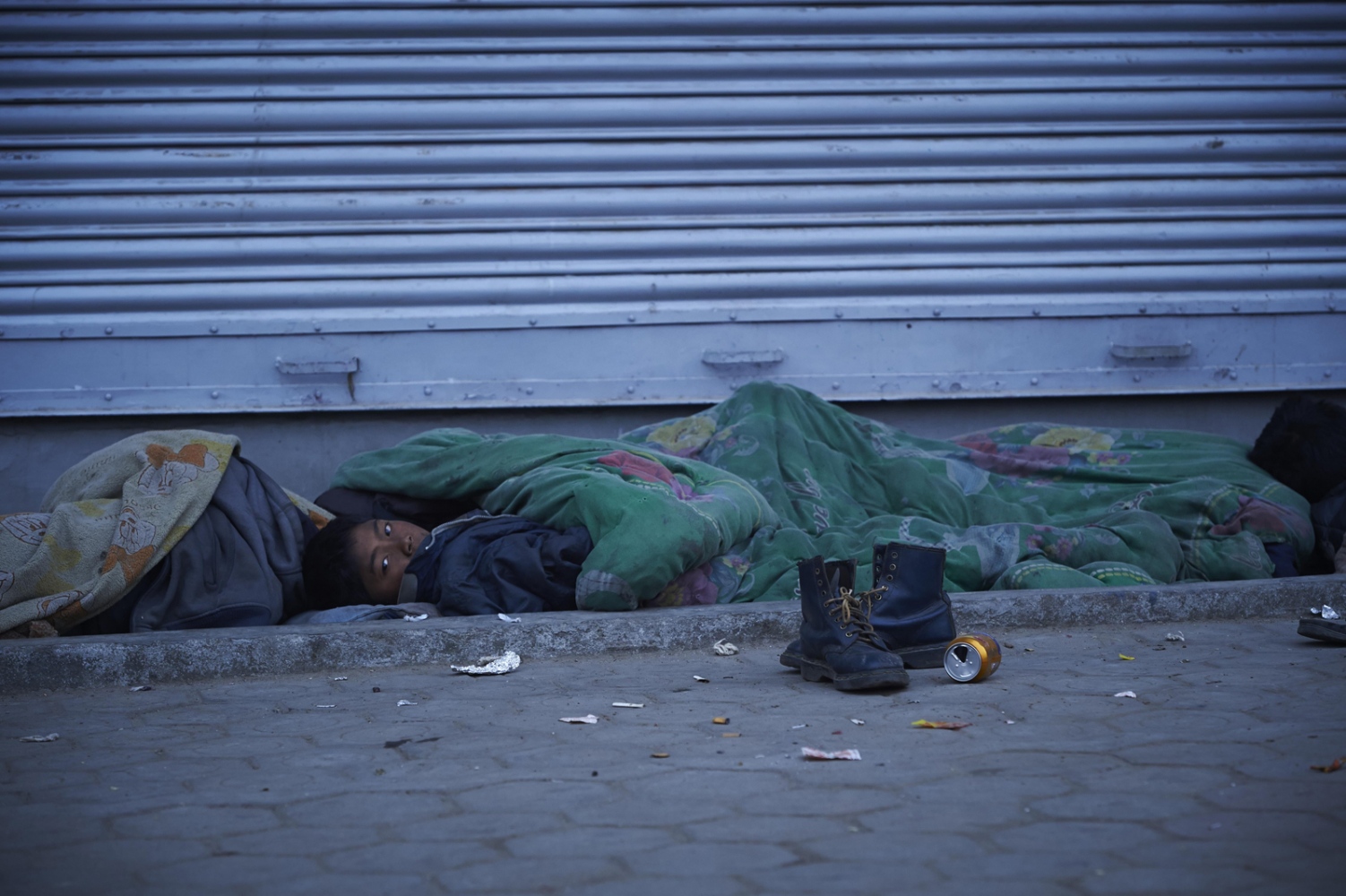 Captions
When I first met Sandesh (12) in October 2015, he was new to living on the streets. Meeting him again, after only four months, his figure and appearance had changed drastically, he also had a dry cough. 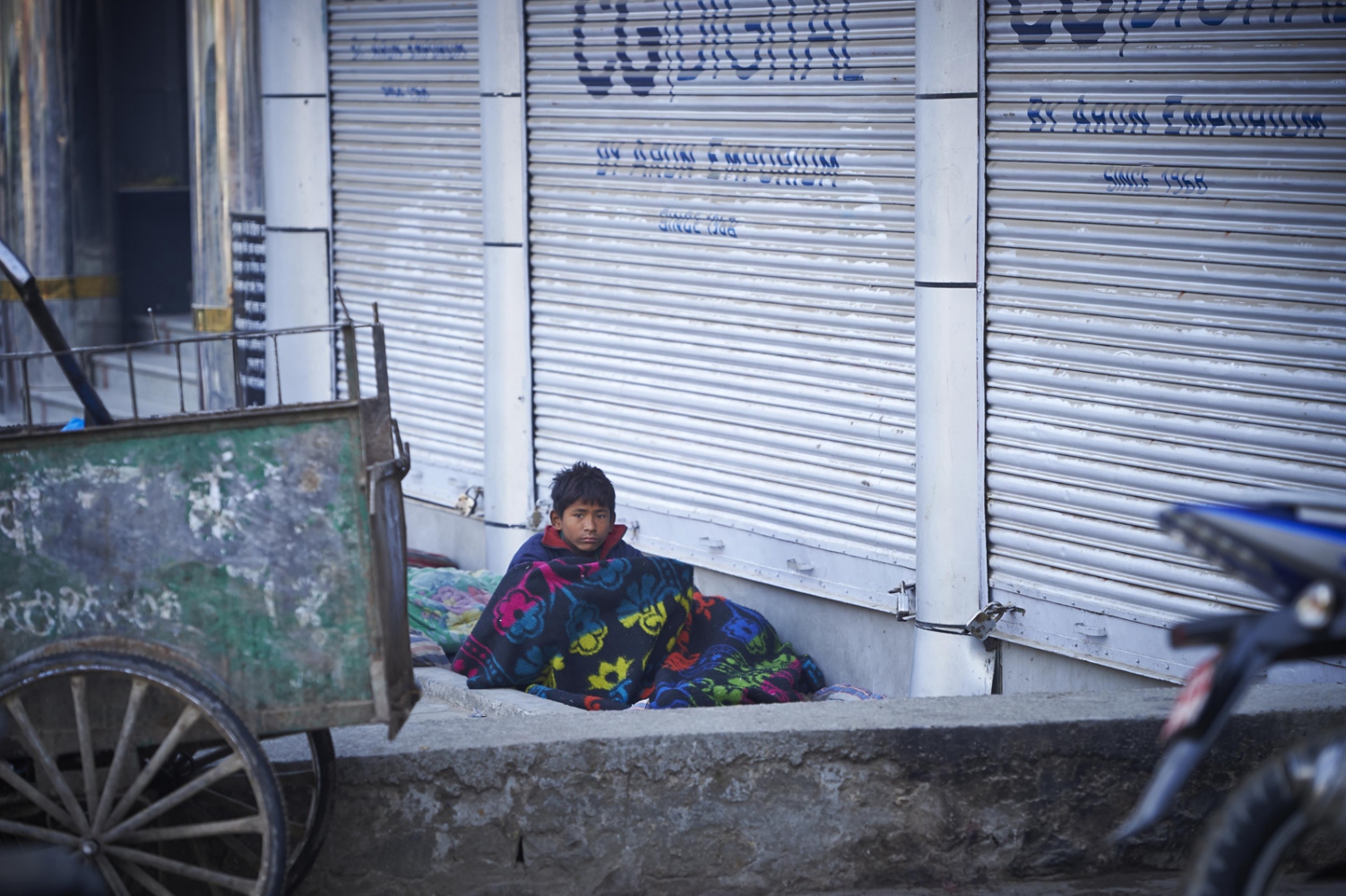 Captions
Sanim (15), had been lured by his friends to believe that sleeping on the streets was easy because it is the capital, he says that they were wrong. 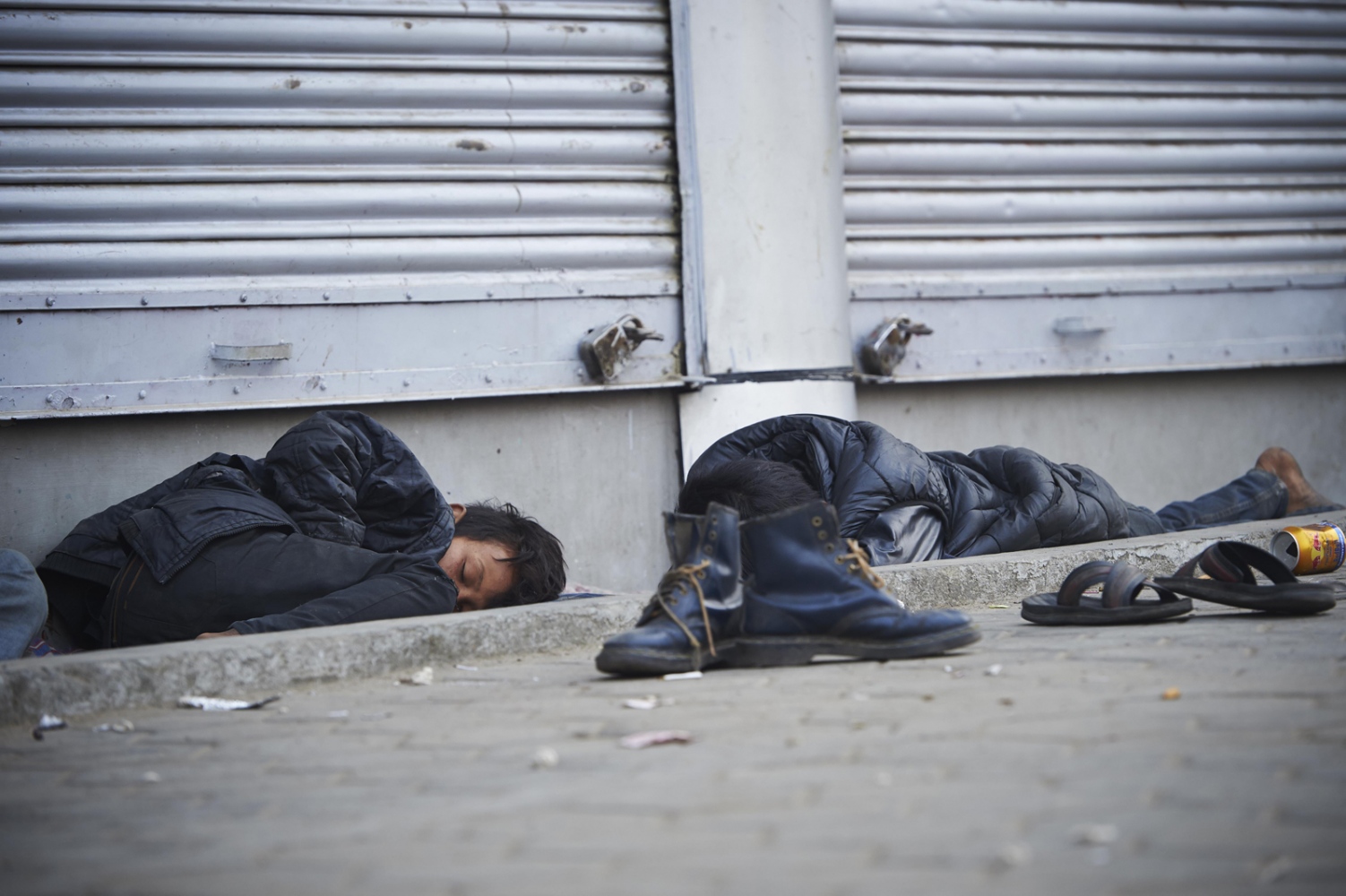 Captions
Aroon (11, visible face), sleeps outside of a local electronic store together with friends. He escaped from home four years ago, because his parents abused him. 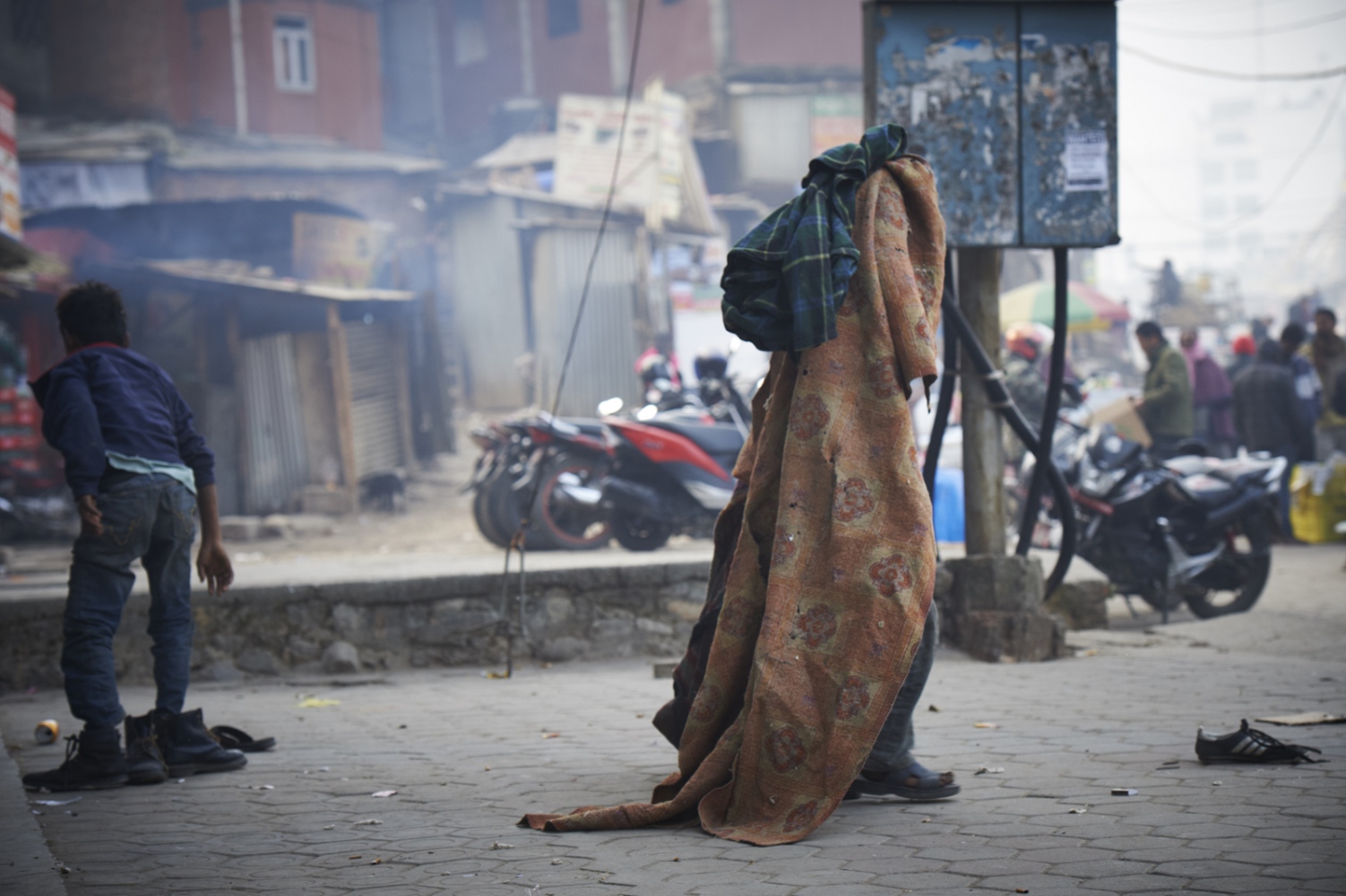 Captions
Through an agreement with the manager of the local electronic store the children were able to sleep outside of it. They had to keep the space clean during daytime and move their belongings. 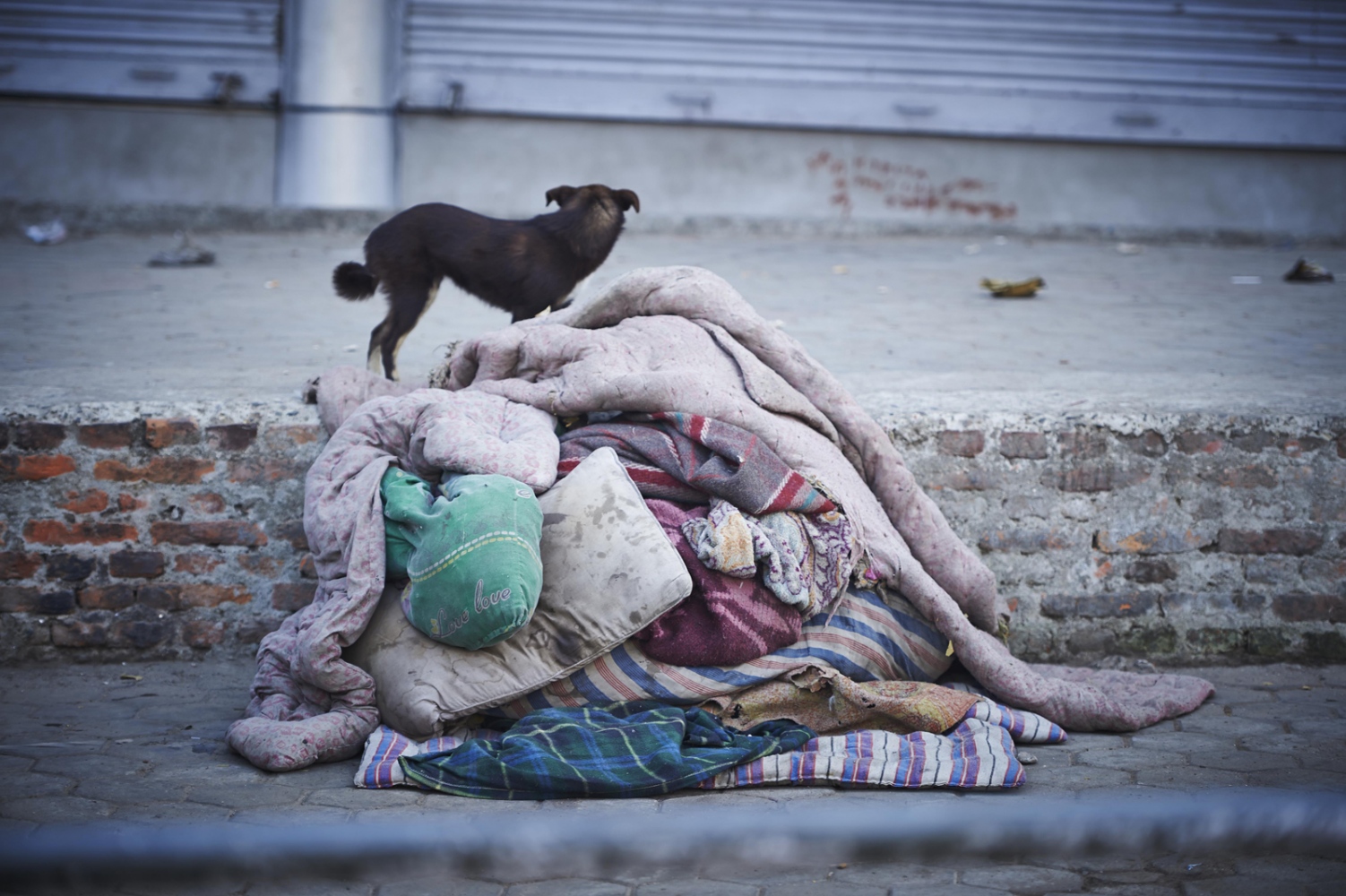 Captions
The children explained that even though they have blankets, the ground gets very cold at night. The dogs are good to cuddle with for heat. 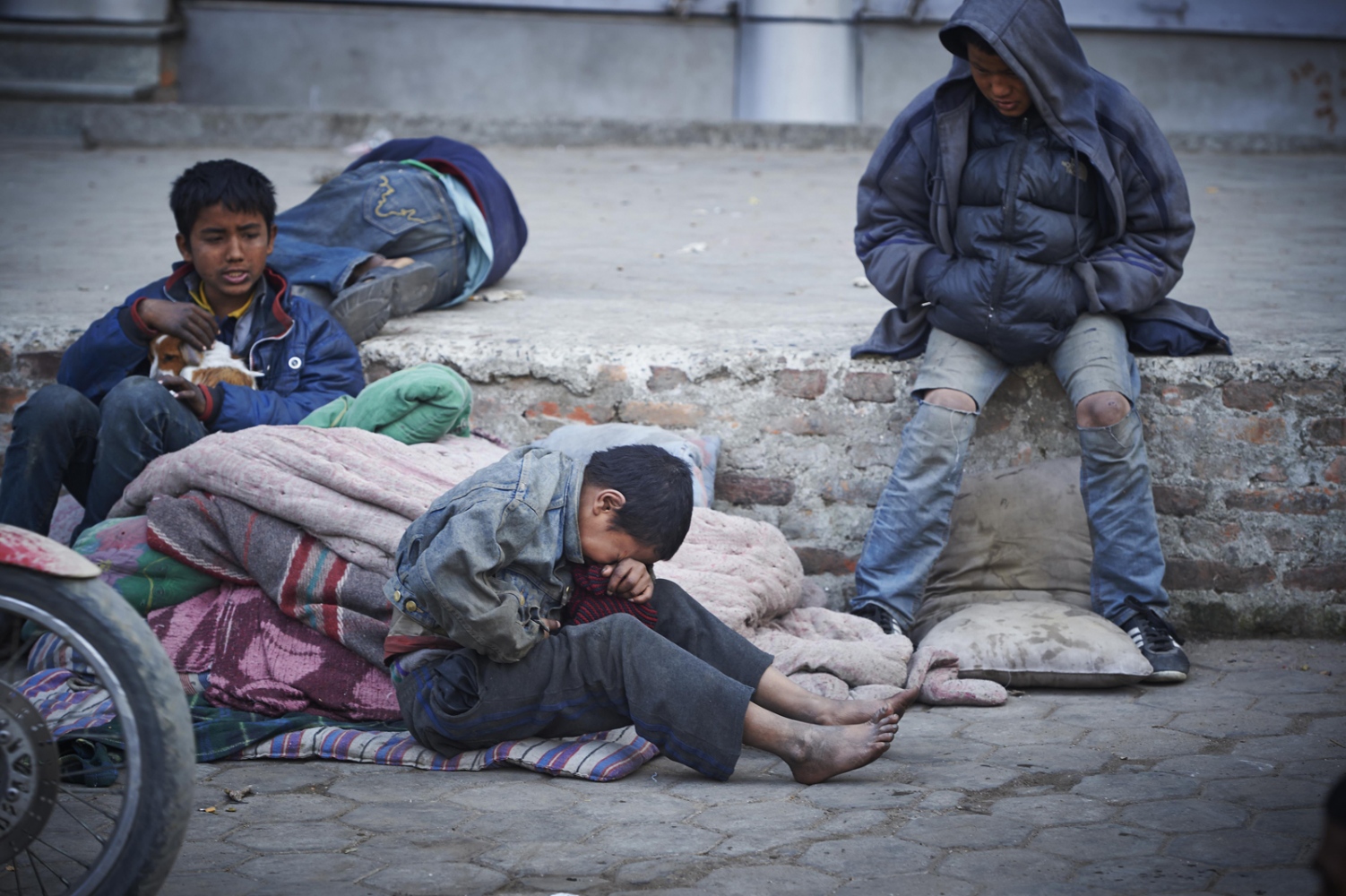 Captions
The children had explained that they always were exposed to violence from adults and even policemen, they are often misunderstood for being criminals/petty thieves. 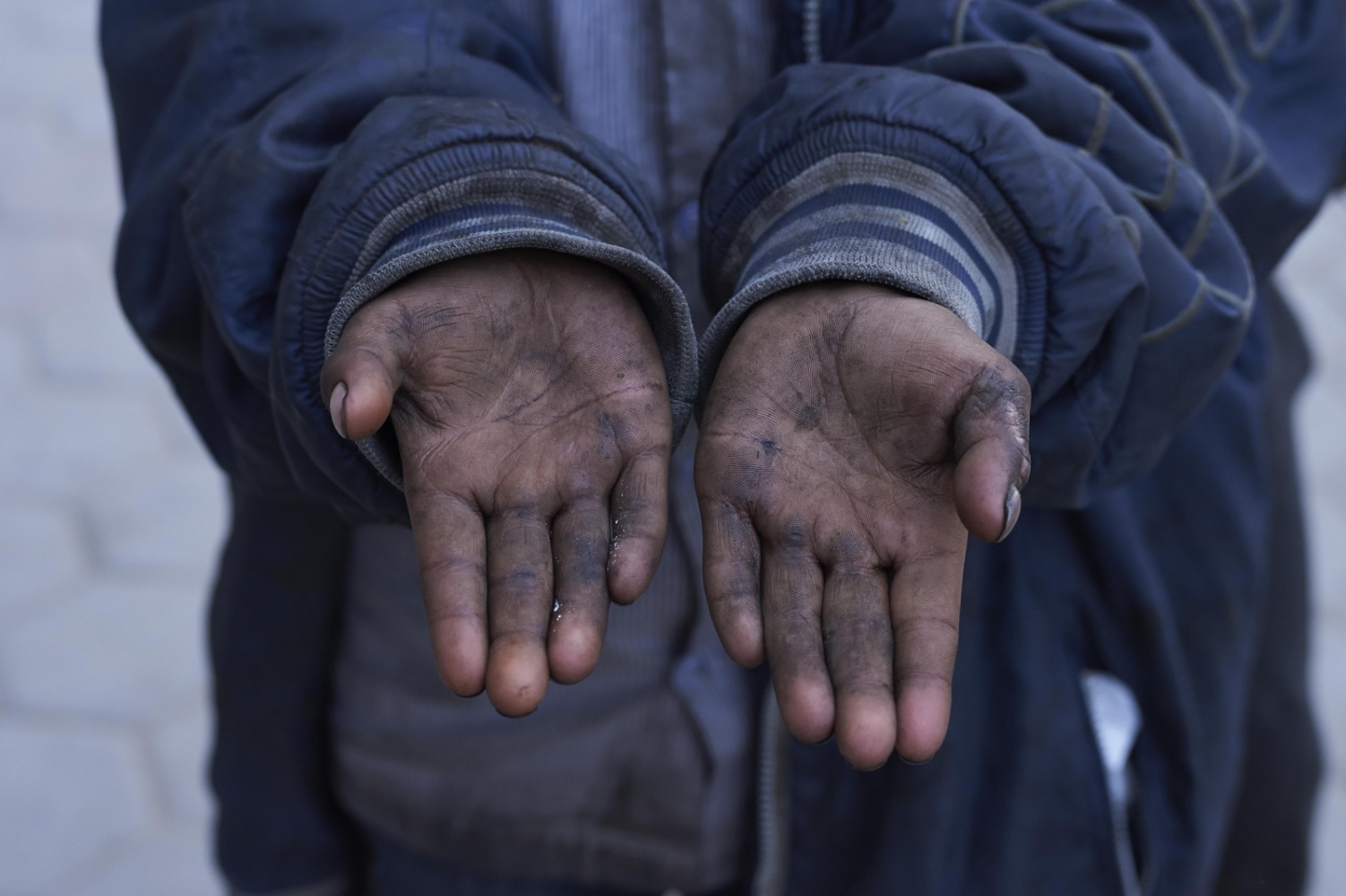 Captions
The childrens bodies and clothing became grimy fast, even if they washed themselves. This led to them suffering from hygenic problems. 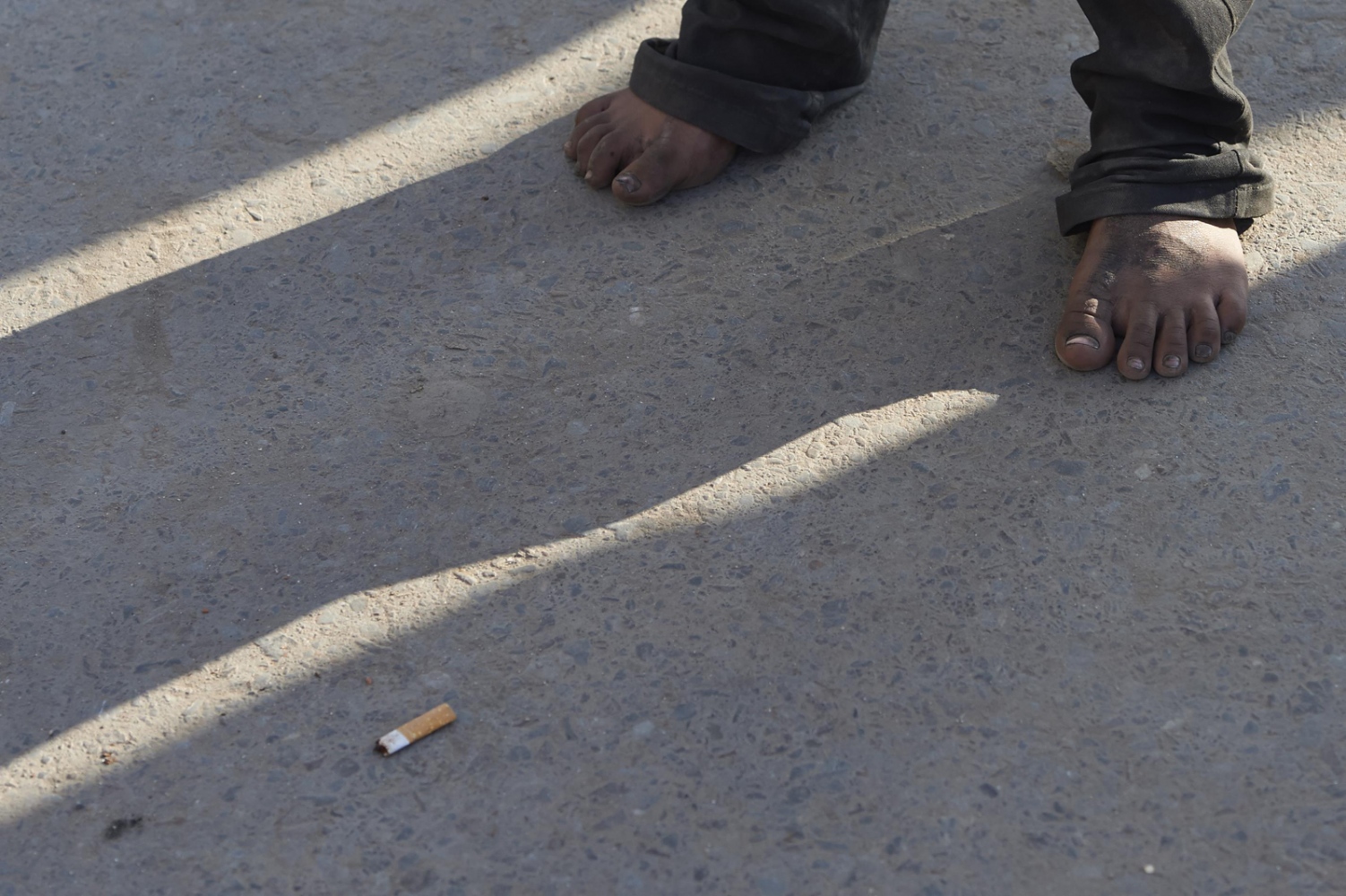 Captions
Even in the cold winter days of February, the children who sleep on the streets can be seen moving around barefoot.Â 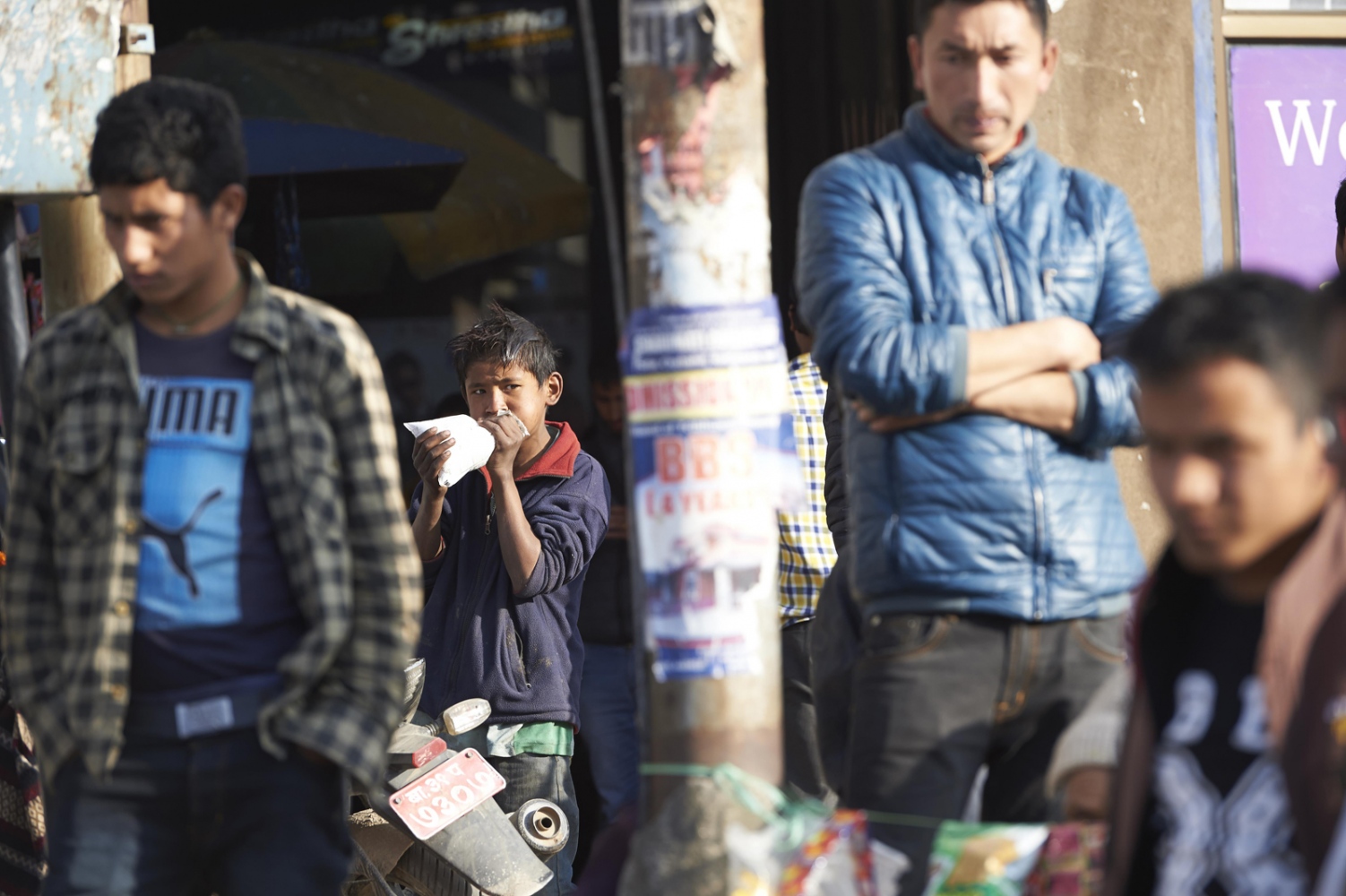 Captions
Even in the middle of the day, with the busy surrounding Sanim (15) could not stop sniffing glue, he was addicted to the drug. 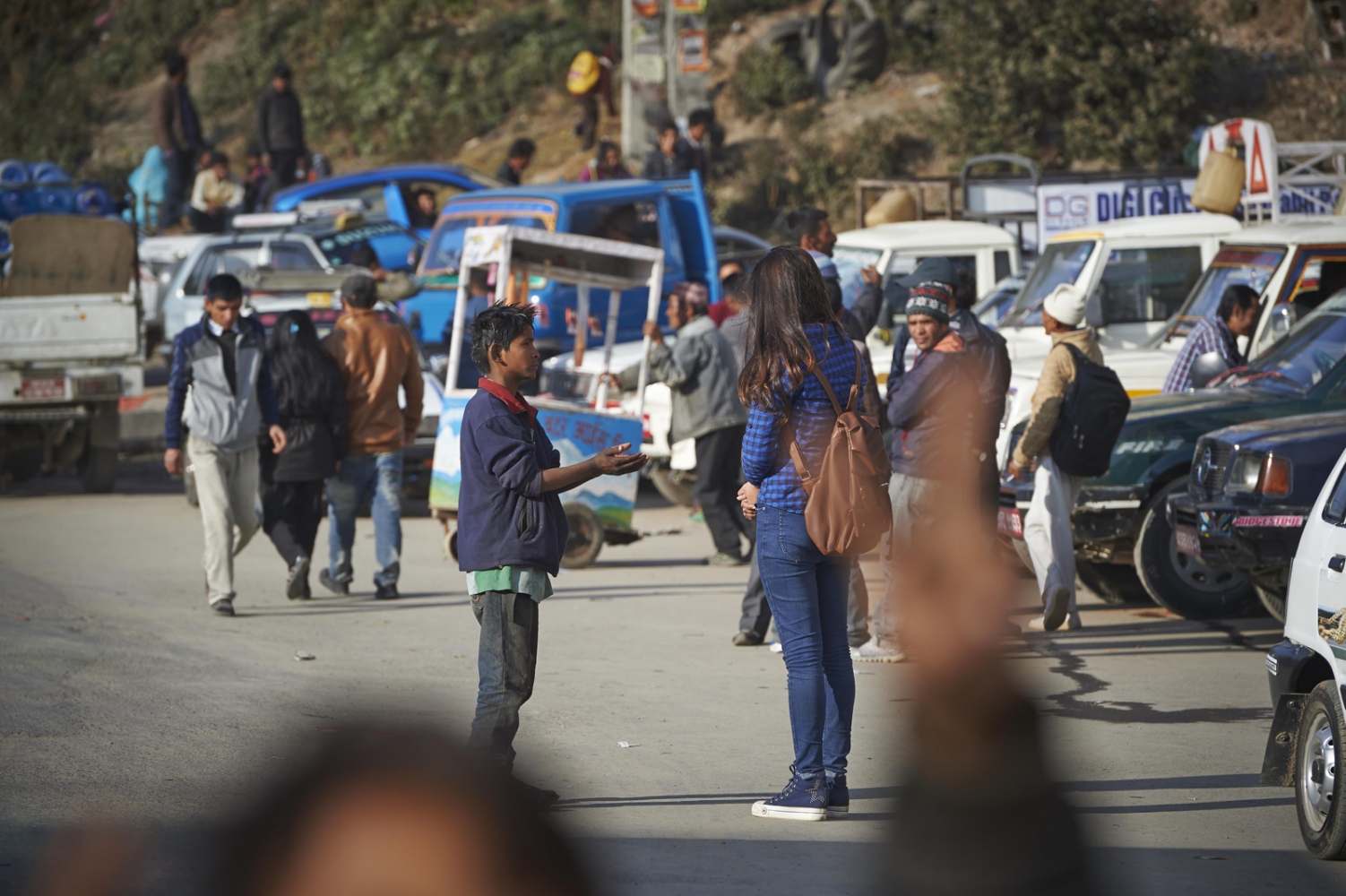 Captions
Sanim (15), explained that he did not enjoy sleeping on the streets. He did not like to have to beg for money, but he had no other choice.

Youngho Kang was born in 1970, Seoul, South Korea. He is well known as a commercial photographer in South Korea. His nickname is â€œDancing Photographerâ€, a nickname given to him because of his unique shooting style, which is that while taking pictures he communicates with the model through dancing, or very much as a conductor, with music always playing in the background.